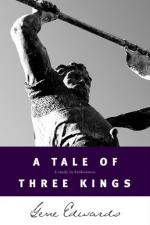 It is young David's responsibility to watch over the sheep his father raises to provide for the family.

One day David saves a sheep from the hungry claws of a bear.

David will fight off a giant one day much the way he fought the bear.

David goes to live in a palace with an old, cranky king who is unkind to him.

After running away from Saul, David hides in a cave with some men who have come to follow him.

When David is an old man, he learns that his son wants to take over his kingdom. David allows this to happen, believing it is what God wants.

David fights both the bear and the giant with rocks.

The army of David's time fight with spears. Saul uses spears to abuse David, both physically and symbolically.

A Tale of Three Kings from BookRags. (c)2022 BookRags, Inc. All rights reserved.