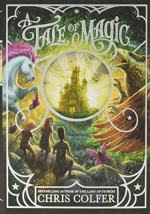 Chris Colfer
This Study Guide consists of approximately 65 pages of chapter summaries, quotes, character analysis, themes, and more - everything you need to sharpen your knowledge of A Tale of Magic.

A Tale of Magic Summary & Study Guide includes comprehensive information and analysis to help you understand the book. This study guide contains the following sections:

This detailed literature summary also contains Quotes and a Free Quiz on A Tale of Magic by Chris Colfer.

Brystal Lynn Evergreen is an extraordinary girl living in the suppressed society of the Southern Kingdom where girls are not allowed to read anything other than recipes and signs. Moreover, they are expected to want nothing other than to become wives and mothers. Brystal, however, is harboring a secret love of reading. She devours every book her brother can sneak in for her. When her brother gets his first job, Brystal knows he will no longer have the opportunity to bring her books from the library. Her dismal world becomes even more hopeless. When Brystal sees a sign advertising for a maid at the public library – a building she would not ordinarily be allowed to even enter – she applies. Each evening, she rushes through her work and takes a couple of books home with her to read. When the practice almost lands her in trouble, she decides she will only read while at the library. She is soon spending most of every night there as well.

One night, Brystal's exploration takes her into a room that is designated for Justices only. There, Brystal discovers a cache of banned books that have been banned because they are far outside what is allowed in the Southern Kingdom. One of those is a book about magic, written by Madame Celeste Weatherberry. The book contains two spells – one that reveals if the person casting the spell is a witch and another reveals if the person is a fairy. According to Madame Weatherberry, witches use witchcraft and fairies use magic, an important distinction. Brystal is shocked when the spell reveals that she is a fairy with magical powers. Brystal is caught performing magic and reading a book, and thrown in jail. Hours later, Brystal's case is rushed through the kingdom's justice system. She would have been executed on the spot except that her father intervened. He was able to get Brystal transferred to a labor camp instead, but he made it clear that he wanted nothing more to do with her.

Brystal and her friends then reach out to the monarchs of the four kingdoms, including King Champion of the Southern Kingdom. They demand some changes. King Champion agrees. Brystal has a brief encounter with her father and makes it clear that she is no longer afraid of him and that she has grown into a confident young woman. As Brystal and the others return to the magical estate Madame Weatherberry created, they are joined by hundreds of other people with magic. All are happy that they have a place they can live without fear of persecution.

More summaries and resources for teaching or studying A Tale of Magic.

A Tale of Magic from BookRags. (c)2022 BookRags, Inc. All rights reserved.