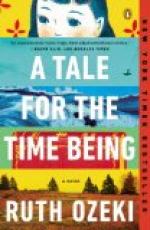 A Tale for the Time Being - Section 3 Summary & Analysis

On December 10, 1943, Haruki #1 writes to his mother telling her that it has been three months have passed since the Measures to Strengthen the Internal Situation announced terminating student deferments and shutting down the Department of Philosophy. So Philosophy, Law, Literature, and the Economy departments are all being shut down so the students can join the army to fight in the war.

It has been two months since they had a send off from Meiji Shrine and one week since he bid goodbye to his family and he entered the barracks of the Navy Airbase. He tells her that she would not recognize him he has changed so much.

On January 2, 1944, he writes that he has believed he would die ever since he learned that the student exemptions were terminated. His life at the university seemed trivial on learning he would be joining the...