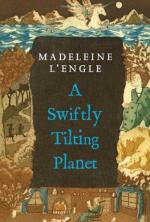 Madeleine L'Engle
This Study Guide consists of approximately 47 pages of chapter summaries, quotes, character analysis, themes, and more - everything you need to sharpen your knowledge of A Swiftly Tilting Planet.

While never actually identified as such, the North Eastern corner of the United States, the arrival site of several waves of immigration into the New World, is tje setting for the novel's action in both past and present.

More summaries and resources for teaching or studying A Swiftly Tilting Planet.