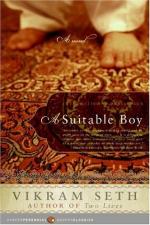 Vikram Seth
This Study Guide consists of approximately 49 pages of chapter summaries, quotes, character analysis, themes, and more - everything you need to sharpen your knowledge of A Suitable Boy.

This detailed literature summary also contains Topics for Discussion and a Free Quiz on A Suitable Boy by Vikram Seth.

A SUITABLE BOY by Vikram Seth is the story of four families in India in the early 1950s after British occupation has ended and the India/Pakistan Partition has taken place. Though not an epic novel in the usual sense of the word, A SUITABLE BOY is certainly epic in scale, over 1,400 pages in length. To understand the novel, the reader must also understand to a certain extent the Indian culture of racial castes and arranged marriages. It is, in fact, the idea of the arranged marriage that is implied in the title. A great deal of effort is put forth on the part of a family to find a "suitable boy" for their unmarried daughters. As Indian girls gain more independence like going out shopping in small groups of friends and attending university classes, there arises a conflict between many girls and their families over the idea of an arranged marriage. Arguably the central character of the novel, Lata Mehra, questions how a woman could marry and live with a man she could not love because she knew nothing about him. The novel begins with the arranged marriage of Lata's sister Savita to Pran Kapoor,a young man who is a professor in Brahmpur University and from a prominent family. He is, therefore, a "suitable boy." Lata's widowed mother, who made the arrangements for Savita's marriage, is intent on marrying off her youngest daughter, Lata. Although the novel is not political in nature, there is enough of the conflict between Hindu and Muslim to explain certain prejudices, and it is into one of those prejudices that Lata rushes headlong as she meets and eventually falls in love with Kabir Durrani, a Muslim and son of a prominent mathematician at the University. To further complicate the plot, Maan Kapoor, Pran's younger brother, becomes infatuated with the notorious Muslim courtesan, Saeeda Bai. Lata's situation becomes complicated when someone sees her out walking with Kabir and reports it to her mother. Mrs. Rupa Mehra is beside herself thinking Lata has ruined her reputation and no "suitable boy's" family will have her marry their son. When she learns that Kabir is Muslim, she hastily packs herself and Lata off to Calcutta.

The plot contains a great many political intrigues that are difficult to follow and would be uninteresting were it not for the fact that various family members are involved in the action. Begum Abida Khan narrowly manages to retain the family residence after a run in with L. N. Agarwal over the handling of a near riot. The melee was caused by the intention to erect a Hindu Temple adjacent to a Mosque which, incidentally, had once been a Hindu Temple. The sticking point was a phallus of Shiva in the temple directly between the mosque and Mecca, toward which Muslim's pray. The political maneuvering comes to a head with the passage of the Zamindari Abolition Bill which will effectively cause large land holders to lose much of their property.

The plot continues throughout the novel centering mostly on the "suitable boy" theme played out in sub-plots involving Maan Kapoor and Saeeda Bai, Ishaq and Tasneem, and most especially Lata and Kabir and "suitable boys" to whom she is introduced in Calcutta. In the end, Lata resolves to give up Kabir and marry a "suitable boy" she likes but does not love. Aside from Lata's heartbreaking decision not to marry Kabir, there is little real ugliness in the novel outside of inter- and intra-family intrigues which Seth somehow manages to make interesting reading.

More summaries and resources for teaching or studying A Suitable Boy.