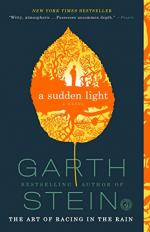 Related Topics
The Art of Racing in the Rain

Garth Stein
This Study Guide consists of approximately 47 pages of chapter summaries, quotes, character analysis, themes, and more - everything you need to sharpen your knowledge of A Sudden Light.

This detailed literature summary also contains Quotes and a Free Quiz on A Sudden Light by Garth Stein.

The following version of this book was used to create this guide: Stein, Garth. A Sudden Light. Simon and Schuster, 2014.

A Sudden Light is a family drama about redemption and destiny, made more potent with the addition of ghosts.

Trevor Riddell is 14 years old in 1990, when his parents declare bankruptcy, lose their home, and embark on a trial separation. With his mother gone to England to see her family, Trevor accompanies his father Jones to his childhood home outside of Seattle.

Riddell House, now inhabited only by Jones's younger sister, Serena, and aging father, Samuel, is an elaborate wooden mansion almost a hundred years old. However, it is now in disrepair. It was built by Elijah Riddell, a timber baron who grew wealthy in 1904 with a railroad merger. However, when his son Benjamin died in a tragic accident, Elijah proclaimed that the Riddell land could never be developed.

In 1990, that statute has run its course, and Jones and Serena plan on getting Samuel to sign off on a lucrative real estate deal. Jones hopes the success will help him win his wife back, but the land has its own plans.

Trevor hears the house speak to him by name, and before long he sees "the ghost” of Riddell House—Ben Riddell himself. There are rumors of other ghosts, too. Samuel, who appears addled with dementia, claims to hear his late wife dancing at night.

Ben leads Trevor to various places in the house where he can find old letters and journals from the past—those belonging to Elijah Riddell and Harry Lindsey, both of which feature Ben. They tell of a young man at odds with his father's business, perhaps too progressive for his time. Ben was the conservationist son of a timber baron, who preferred climbing trees to felling them. Ben was also homosexual, and while Ben’s chosen wife understood this, his father did not.

Following Harry's and Ben's deaths, Elijah reported that he would prevent the 200 acres from ever being developed. As Trevor emerges from these glimpses into history, his view of Riddell House and his role there changes. Rather than aiding his father and aunt, Trevor begins to see ways their scheme is not right. Aunt Serena especially becomes more duplicitous as the plot unfolds, until Trevor eventually realizes she is faking the brunt of Samuel's "illness" and basically planning to kidnap his father in a crazed, incestuous plot.

Trevor tries to confront his father with these details, but Jones refuses to believe him. Ben appears to Trevor in a dream one last time, during which he both releases Trevor from his task yet urges him to stop his father and aunt from selling.

At the novel's climax, Trevor suspects that Serena is tricking her father into thinking the ghost of his dead wife is dancing in the ballroom. He traps her escape route, and the family presses her on her dishonest plotting. She breaks down under Jones's declaration that he wants to return to his wife and let the city have the house for a park. In the middle of the night Serena sets the house on fire. Trevor and his grandfather escape, but Jones and Serena die in the fire.

Twenty years later, Trevor returns to the Riddell land with his own family. It is a large city park by then, just the way Benjamin Riddell wanted it. Trevor's mother sees his father's ghost, and begs Trevor to tell her the Riddell family story.

More summaries and resources for teaching or studying A Sudden Light.