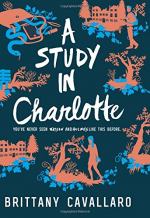 Jamie looks back on when he first met Charlotte Holmes. The school they attend—Sherringford, in Connecticut—pays full tuition for him on a rugby scholarship. He actually hates both rugby and Sherringford because they are too closely connected to his estranged father.

Jamie’s roommate, Tom Bradford, is dating a girl named Lena, whose roommate is Charlotte Holmes. Both Jamie (Watson) and Charlotte are descended from the long-ago literary giants. Tom invites Jamie to a party at Lena’s and Charlotte’s dorm. At the party, Tom points out Sherringford’s most famous students: the town dealer, some Governor’s son, and Charlotte Holmes. Tom points out that he and Jamie are poor compared to most of the student body. The first time Jamie sees Charlotte, she’s playing poker. He finds her pretty, and he is drawn to her English accent.