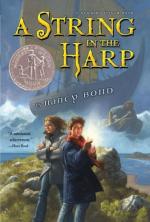 A String in the Harp Summary & Study Guide

Nancy Bond
This Study Guide consists of approximately 42 pages of chapter summaries, quotes, character analysis, themes, and more - everything you need to sharpen your knowledge of A String in the Harp.

A String in the Harp Summary & Study Guide Description

A String in the Harp Summary & Study Guide includes comprehensive information and analysis to help you understand the book. This study guide contains the following sections:

This detailed literature summary also contains Topics for Discussion and a Free Quiz on A String in the Harp by Nancy Bond.

A STRING IN THE HARP is the story of a mysterious harp tuning key and its powers to merge present day life in Borth, Wales with the ancient, mythical time when the land was ruled by kings, warriors, and bards.

The novel opens with Jen Morgan making her way to Borth, Wales to visit her family during her winter break from school. After Jen's mother died, her father and two younger siblings had moved to Wales while she had stayed behind, living with an aunt and uncle, to finish her schooling. When Jen arrives, she quickly sees that her family has fractured; her father spends his days locked in his study while her younger brother, Peter, is hostile, withdrawn, and clearly depressed. He feels lonely and wants nothing more than to return home. When the novel shifts to Peter's perspective, the reader learns that while out on a walk, Peter comes across a mysterious Y-shaped key, pockets it, and takes it home. Soon, Peter realizes that the key has magical powers. It vibrates, sings, and shows Peter mysterious images of an ancient world. The longer Peter has the key, the more time he spends in its mystical world, become more and more withdrawn from his family in present time. Until Jen's arrival, no one notices his change in character because everyone is too concerned with their own lives and adjustments in the new country. Sensing that he may have an ally in Jen, Peter tells her about the key and its magical powers. Shocked, Jen refuses to believe Peter and refuses to help him solve the mystery. Completely disheartened, Peter absorbs himself more fully in the key's images, leading to him completely fall behind in school and become more and more aggressive with his family.

As the Morgan family spends more time in Wales, the mystery of the country comes to the forefront of their time, particularly as they meet various characters who believe in magic over science, including Dr. Rhys, a leading scholar in Welsh literature, and Mr. Evans, a farmer who believes the mythic stories of the bards and kings of ancient Wales are fact. Meeting these people confirms the stories Peter believes the key is showing him; he believes he has the famous Welsh bard Taliesin's tuning key, and that it is his destiny to return the key to Taliesin's grave. The only problem is that no one knows where Taliesin truly is buried. While Peter embraces the mysteries of Wales, they make Jen increasingly uncomfortable. She thinks the key is dangerous and that it is causing trouble within her family. She believes that the only way to repair her troubled family is to get rid of the key once and for all. She reaches out to Dr. Rhys and his academic partner, Dr. Owen, and tells them about the key. Meanwhile, the power of the key is beginning to affect the physical present-day world, not just in Peter's mind. This affectation begins with Peter viewing images of the ancient world superimposed over what he is experiencing in the present-day world, as if he is experiencing two worlds at once. At first, Peter is the only person who straddles the two eras simultaneously, but soon, this too begins to change; first, while out on a hike, Peter's siblings find a coracle, an ancient fishing boat, and even see Taliesin himself in the distance. Later, a wolf from ancient times appears in the present and begins killing farmers' sheep. Finally, Peter and his friends witness Taliesin's funeral in the distance, although no one is quite sure what they are seeing.

As the power of the key grows, so does Dr. Owen's desire to have it for himself. Even though he is not sure exactly what the artifact is that Peter is guarding so jealously, he will stop at nothing to obtain it and even threatens to take legal action against the Morgans. As the novel progresses, however, Jen has a change of heart and begins to trust her brother's journey with the key. Although she is still skeptical of believing that the key is magical, she cannot ignore the signs that Taliesin's ancient world is beginning to merge with the present, an acknowledgment that terrifies her. She knows that only Peter has the power to stop the merging worlds, and that nothing will end in peace if Dr. Owen obtains the key. By the end of the novel, Peter has figured out where Taliesin's grave is, and safely returns the key to its rightful owner, and the world returns to normal. Through the process of protecting Peter, and trusting that he will do what is right with the key, the Morgan family heals, and begins to work and live together as a family unit.

More summaries and resources for teaching or studying A String in the Harp.

A String in the Harp from BookRags. (c)2022 BookRags, Inc. All rights reserved.