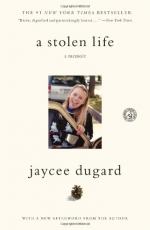 Jaycee Dugard
This Study Guide consists of approximately 26 pages of chapter summaries, quotes, character analysis, themes, and more - everything you need to sharpen your knowledge of A Stolen Life.

A Stolen Life: A Memoir Summary & Study Guide includes comprehensive information and analysis to help you understand the book. This study guide contains the following sections:

This detailed literature summary also contains Topics for Discussion on A Stolen Life: A Memoir by Jaycee Dugard.

A Stolen Life is the autobiographical memoir of Jaycee Dugard. Dugard was kidnapped in June of 1991 near her home by Phillip and Nancy Garrido. For eighteen years, she was a captive of the couple and forced to endure repeated sexual abuse and false imprisonment.

Dugard was a typical eleven-year-old girl growing up in Lake Tahoe, California. While on the way to school, a van pulled alongside her. Phillip Garrido tazed her and then forced her into the van, putting a blanket over her. She was driven many miles away to Antioch, California. She was handcuffed and left in the music studio Dugard had built in the backyard of his home. Phillip's wife, Nancy, was an accomplice to this captivity.

Dugard was forced to perform sexual acts on Garrido, and she was often raped. During the worst moments of sexual abuse, Phillip would go on a "run," a days-long binge on "crank" or crystal meth. In his drug-induced stupor, he would force Dugard to act out his depraved sexual fantasies. Dugard had deep psychotic problems, including pedophilia and aural hallucinations. He claimed to communicate with angels, and he tried to establish a church based upon his perceived ability to telepathically communicate with like-minded people.

Dugard, frozen with fear, paralyzed with sadness and boredom, endured year after year of being confined to a couple of music studio rooms in the backyard. She eventually earned more freedoms, but for many years she was never allowed to travel anywhere. Phillip's constant sexual and verbal abuse gave Dugard a skewed view of the world, but she held on to the hope that she would see her mother and her baby sister again.

Phillip impregnated Dugard twice, once when she was fourteen and another time when she was seventeen. They delivered the baby themselves as they could not risk taking her to a hospital for fear of being discovered. The children, two girls, grew up with Dugard and she grew to love them dearly. The children came to know Dugard as a sister named Allissa rather than their mother.

In August of 2009, a full eighteen years after her abduction, Dugard was finally freed. Phillip's mind had deteriorated to the point he went to a local FBI office to convince them he had special mental powers. Parole officers questioned Dugard separately and the truth was finally uncovered when Phillip confessed to the kidnapping.

Dugard had a teary and joyous reunion with her mother as well as her aunt and younger sister. In the time after her release, Dugard had seen a therapist and was slowly undoing the abuse. She also formed an organization called the JAYC foundation to help victims of abuse recover.

More summaries and resources for teaching or studying A Stolen Life: A Memoir.

A Stolen Life: A Memoir from BookRags. (c)2022 BookRags, Inc. All rights reserved.