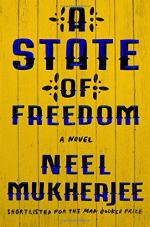 A State of Freedom Summary & Study Guide includes comprehensive information and analysis to help you understand the book. This study guide contains the following sections:

This detailed literature summary also contains Quotes and a Free Quiz on A State of Freedom by Neel Mukherjee.

The following version of this book was used to create this study guide: Mukherjee, Neel. A State of Freedom. New York: W.W. Norton & Company, Inc., 2018.

A State of Freedom is set in India. The book contains five distinct narratives. Part I takes place in the city of Agra. A man is on a tourism trip with his six-year-old son. The man was born in India but has lived in the United States for the past 20 years. His son was born in the United States and has never been to India before. The man tries and fails to interest his son in the historical sites that they see on their trip. They witness a multitude of disconcerting things, such as a construction worker falling from a ledge to his death. One night in their hotel room, the boy says that he feels scared. When morning comes, the man awakes to find that his son has suddenly died of unclear causes.

Part II takes place in the city of Mumbai. The unnamed narrator is a man who was born in India. He now lives and works in London, but he visits his parents in India every year. His parents employ two servants: a cook named Renu and a maidservant named Milly. The narrator opposes all forms of abuse toward servants. Thus, his parents generally act gently towards Renu and Milly. The narrator is working on compiling a cookbook of regional Indian cuisines. The cookbook makes him take an interest in Renu’s work. He also begins to take an interest in her personal life. He discovers that she lives in a slum and is saving money to buy a house of her own. He also discovers that she used to be married, but she left her husband due to his drinking and gambling habits. He is surprised to find that Renu, unlike most servants, is somewhat hostile in her attitude. Her hostility grows, and the narrator’s parents eventually fire Renu.

Part III opens in a small Indian village called Deodham. Lakshman lives a life of poverty in the village. He is married and has children, but he is unemployed. One day, he finds a bear cub and takes it to his home. He names it Raju and plans to make money by training it to dance as entertainment. He hires a man named Salim to surgically insert a necessary rope through Raju’s nose. Laskhman is unable to pay Salim the full amount for the operation, and Salim says that he will return later for payment. Lakshman travels to nearby towns with Raju, and he makes Raju perform on the street for money. Their travels are difficult, and they do not make much money. They eventually arrive at a slum and begin to make more substantial amounts of money. Salim finds them, but Lakshman refuses to pay all of what he owes at that time. The monsoon season soon begins, and Lakshman loses all of his money in a rainstorm.

Part IV follows the character of Milly from childhood. She is born in a small, impoverished village. At the age of eight, she is taken out of school and is sent to work as a maidservant in a distant town. Years later, she is sent to work in the house of new, stricter employers. At about the age of 17, she is sent to work in the house of a wealthy family. Hemali, the wife of the household, disallows Mill from ever leaving the house. Meanwhile, Milly’s childhood friend Soni joins a group of Maoist guerillas who operate around Milyl’s childhood village. After a year of confinement, Milly manages to escape. She marries and has children, and she insists that her children receive full educations. She soon receives word that Soni is dead, likely killed by her fellow guerillas while attempting to flee from them.

Part V is a brief narrative that concludes the novel. It follows a man who has moved from a small village to a city. He works as a construction worker, and he soon develops a cough and chest pain, potentially due to the inhalation of hazardous materials on the worksite. As the illness kills him, he thinks to himself that he wishes to be reincarnated as the son of a wealthy man.

A State of Freedom from BookRags. (c)2022 BookRags, Inc. All rights reserved.