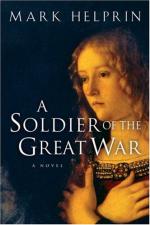 A Soldier of the Great War Summary & Study Guide

A Soldier of the Great War Summary & Study Guide Description

A Soldier of the Great War Summary & Study Guide includes comprehensive information and analysis to help you understand the book. This study guide contains the following sections:

This detailed literature summary also contains Topics for Discussion on A Soldier of the Great War by Mark Helprin.

This is essentially an episodic novel. It is the story of the life of Alessandro Giuliani, a Roman intellectual who fights in World War I for Italy although his natural tendency leans toward pacifism. The story is related in both monologue and dialogue as Alessandro hikes with Nicolo Sambucca, an earnest but simple laborer who prods Alessandro into telling him the story of his life as they travel over the Alps toward Rome. Alessandro is shot at, taken prisoner, and eventually released during the war. As he endures these dangers and hardships, the reader sees him growing spiritually and maturing as a man.

Alessandro encounters fools and fascists, paranoids and pacifists, scientists and sinners as he survives the war. He keeps alive in his heart the belief that he will be reunited with his adored wife, Ariane, and their son at the conclusion of the war. Alessandro pushes aside fears that they may have been killed or lost and clings to this dream as his primary reason for living in the face of the brutal "war to end all wars." Alessandro's experiences in the war and afterward are a microcosm of the larger currents of change worldwide brought about at the dawn of the 20th Century, including the advent of the machine age, revisions of longstanding social and personal mores, and the "shrinking" of the world due to advances in transportation and communications.

He finds the love of his life, then loses her and then finds her again toward the end of the war. They have a son who is killed in the second World War, which only cements Alessandro's pacifism rather than destroying his belief in God. Regardless of the circumstances, Alessandro continues to expand spiritually and artistically, which is the aspect of his character that is most extraordinary. Some of this growth he imparts to his hiking companion, but the bulk of it is a treasure where the reader gets a portrait of a whole person who is at peace with himself and with God. Alessandro is the opposite of the modern antihero because of the basically positive orientation of his life despite the fact he experiences absurdity, suffering, sacrifice, yearning, and frustration. Alessandro's character shines like a bright beacon through these pages, affirming the importance of life and love.

A Soldier of the Great War from BookRags. (c)2022 BookRags, Inc. All rights reserved.