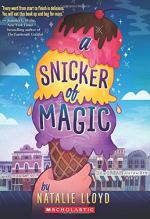 Natalie Lloyd
This Study Guide consists of approximately 43 pages of chapter summaries, quotes, character analysis, themes, and more - everything you need to sharpen your knowledge of A Snicker of Magic.

A Snicker of Magic Summary & Study Guide includes comprehensive information and analysis to help you understand the book. This study guide contains the following sections:

This detailed literature summary also contains Quotes and a Free Quiz on A Snicker of Magic by Natalie Lloyd.

“A Snicker of Magic” is a children’s novel by Natalie Lloyd which follows the efforts of 11-year-old Felicity Juniper Pickle to restore hope to her family, restore magic to the town of Midnight Gulch, and encourage her family to finally settle down and call somewhere home. When the novel begins, Felicity, her sister, Frannie-Jo, their Mama, and their dog, Biscuit, arrive in Midnight Gulch, Tennessee, Mama’s hometown. Mama tells her daughters that Midnight Gulch was once a place of magic, kept secret by the river, the trees, and the mountains around the town. This especially intrigues Felicity, who can sense magic in the air around her. Felicity is a collector of words, seeing them in the world all around her and writing them down. There are many good words she sees in Midnight Gulch.

At school, Felicity fast befriends and develops a crush on a wheelchair-bound boy named Jonah. Jonah reveals he is secretly “The Beedle”, an anonymous part of a do-gooder network famous all over town and in the surrounding area. In class, Felicity’s teacher, Miss Lawson, recounts the history of the town and the Threadbare Brothers, the musical stage name for Stone and Berry Weatherly. Miss Lawson reveals that the town was once home to great magic, but a rivalry that developed between the Brothers led to an epic duel which Stone lost. As a result, Stone was cursed with a wandering heart, leading him to leave Midnight Gulch. Without each other, neither brother could do magic anymore since it wasn’t the same without the other. Over the next several years, the magic in the town died out as well. Now, only traces of magic remain. Miss Lawson announces that in the middle of September, a talent show, the Stoneberry Duel, will be held.

Felicity, who has already come to love Midnight Gulch, hopes that her mother – who moves them around from place to place every few weeks – will want to finally put down roots and stay. She hopes entering the contest will show her mother how much she wants to stay. Jonah agrees to help Felicity get ready for the show. In the meantime, he introduces her to Oliver Weatherly, owner of Dr. Zook’s Ice Cream and grandson of Berry Weatherly, and the first Beedle of the Gulch. Oliver explains his late wife was named Eldee, and that “Beedle” is “Eldee” spelled backwards but with the B from his middle name. It was his wife who began doing good deeds that Oliver later continued, and which Jonah now carries on with a select few others. Oliver tells Felicity to always have all sides of a story.

As time passes, Felicity and Jonah uncover important information about the Weatherly Brothers. A woman named Florentine proves most helpful, explaining the real source of the duel was not money, fame, or wealth from their music careers, but a woman named Isabella – Florentine’s grandmother. She has been carrying her grandmother’s burden for years, hoping to exchange it for her grandmother’s most sacred memory. Felicity later learns she is descended from Stone Weatherly, and that her family is cursed to always fail and wander thanks to the duel. This explains why her uncle, Boone, fails in all that he does; why her aunt, Cleo, has been unsuccessful in love and business; and why Mama always wants to run. Felicity is given a locket passed down to the family from Stone which no one has ever been able to open.

At the talent show, Felicity overcomes her fear of public speaking to talk about the Weatherly Brothers, and how love, family, and home are beautiful and important things, and how love conquers all. It is then that the locket opens on its own, leading all the shadows of the audience members to dance, and leading the audience members to do the same. Inside the locket is Isabella’s favorite memory, of her in an evening field with an unknown man. Felicity exchanges the locket with Florentine for her grandmother’s burden – two jars containing the shadows of the Brothers Threadbare. The shadows are reunited, and the curse is broken. Mama decides she will stay in Midnight Gulch for good, which makes Felicity very happy, and reaffirms the power of love, family, and home to her.

More summaries and resources for teaching or studying A Snicker of Magic.

A Snicker of Magic from BookRags. (c)2022 BookRags, Inc. All rights reserved.