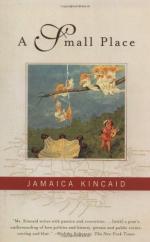 Jamaica Kincaid
This Study Guide consists of approximately 32 pages of chapter summaries, quotes, character analysis, themes, and more - everything you need to sharpen your knowledge of A Small Place.

This detailed literature summary also contains Topics for Discussion and a Free Quiz on A Small Place by Jamaica Kincaid.

A Small Place by Jamaica Kincaid is an opinionated essay cleverly disguised as a novel. There are no acting characters, nor is there a plot. The narrator's voice gives her opinions of the many events and difficulties that have happened to the natives of the island of Antigua. A Small Place is a subjective description of the of government corruption and the lack of concern that the people of one nation has for the people of another. A Small Place also investigates the effects of slavery when the emancipated slaves are never taught how to be ordinary people.

Tourists arrive in Antigua and hail a taxi to get to their resort. They consider the expensive cars that are prevalent in Antigua but do not consider the poor homes that the natives live in. They pass the school and hospital but do not concern themselves with the shabby condition of the buildings or the reflection that the appearance projects on the employees therein. In passing three beautiful mansions, they do not hesitate to wonder if the owners obtained their homes by immoral means. The tourists are unaware that there is no sewage disposal system and their waste floats next to them in the beautiful water they admire so much. The narrator condemns the tourists' lack of concern for the welfare of Antiguans. She expresses her dislike of tourists, who become ugly people when they are on vacation.

The narrator laments that Antigua is not the same as it was in her youth. The library was destroyed in 1974, and has not yet been rebuilt. She condemns the racism prevalent in many organizations in Antigua. She also seems concerned that Antiguans view the way they are treated by white people as bad manners as opposed to racism. She mocks the English's love for England, since they try to recreate it in every land they encounter, ruining the lands and the people. The narrator believes that the English are criminals, and they teach Antiguans crime. She regrets that Antiguans have no language of their own and can only verbally express themselves in the language of the criminal. The narrator defends Antiguans' opposition to capitalism as the result of being considered capital themselves for so long.

The narrator worries that Antigua is in worse shape as a self-ruled nation than when they were ruled by England. The temporary library is in a run-down building and does not have room for all the books, many of which are being ruined. The narrator laments the stupidity of the youth in Antigua. She is very concerned with restoring the library.

The narrator considers the great deal of corruption in Antigua. She reflects on the monopoly that government-owned utility companies have in Antigua and the general corruption of the government officials in procuring wealth for themselves at the expense of the natives' welfare. The narrator reflects on the condition of Antiguans as the result of emancipation. They were released from slavery but never taught how to be ordinary people, especially on the surreal, beautiful island they call home.

More summaries and resources for teaching or studying A Small Place.