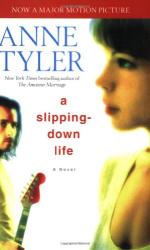 Anne Tyler
This Study Guide consists of approximately 38 pages of chapter summaries, quotes, character analysis, themes, and more - everything you need to sharpen your knowledge of A Slipping-down Life.

This detailed literature summary also contains Topics for Discussion on A Slipping-down Life by Anne Tyler.

A Slipping-Down Life, the third book by the critically acclaimed novelist Ann Tyler, was published in 1970. Written in a clean and unassuming style, it describes the life of Evie Decker, an overweight and lonely teenager, who becomes obsessed with a nineteen-year-old rock musician named Bertram "Drumstrings" Casey. Evie is not a big fan of music but she does listen to the radio, to help fill in the empty hours at the house she shares with her gentle but emotionally remote father. One day, she hears Drumstrings being interviewed by a local disc jockey. Evie goes to one of Drumstring's shows with her best friend, the enormously fat Violet Hayes. They then begin attending shows with another girl from the high school, Fay-Jean Lindsay. Evie becomes fascinated by the cool and slinky Drumstrings, especially by the way he speaks seemingly unconnected sentences and phrases in the middle of his songs. At one concert, after another girl jumps on stage and dances with Drumstrings, Evie goes into the restroom and emerges with his surname, "Casey" carved backwards across her forehead. Everyone is startled, especially Drumstrings, to whom she has barely ever spoken. Evie defiantly concocts a plan to attend all the shows with her hair pinned back to display the scars, and she is aided in this plan by David Elliott, the two-man band's drummer and manager. She becomes something of a local celebrity, and young people come to the shows to see her and Drumstrings.

None of this appeals to Drumstrings, who has no interest in Evie, but he accepts it, because he wants the publicity. He is eager to make money in music and get out of town. Evie's father would like to have a plastic surgeon fix the scar tissue, but he is too timid and defeated by life to make a fuss. After the novelty of Evie's disfigurement wears off, the audiences for Drum's shows begin to wane, and his budding career falters. He becomes morose. After he gets in a fight at a club, his father kicks him out of the family home. He proposes marriage to Evie, saying they could cheaply rent a tenet farming shack in the country. Against her better judgment, she agrees. Drum turns out to be a homebody who just wants Evie to take care of him. He shows little inclination to work as a musician or at anything else. Evie keeps trying to create publicity stunts that will kick-start Drum's musical career. In the midst of one such stunt, a fake kidnapping of Drum, Evie learns that her father is in the hospital with a heart attack. She rushes there, but he has already died. When she returns to the shack, she finds Drum in bed with Fay-Jean Lindsay. Evie sends Fay-Jean away and then announces to Drum that she is pregnant. Her father has left her the family home and she says they should move there together. Drum refuses and at the novel's end, Evie goes alone to the house, her focus now firmly on the coming baby.

More summaries and resources for teaching or studying A Slipping-down Life.