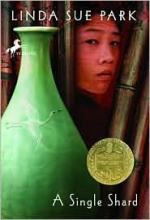 Linda Sue Park
This Study Guide consists of approximately 24 pages of chapter summaries, quotes, character analysis, themes, and more - everything you need to sharpen your knowledge of A Single Shard.

This detailed literature summary also contains Topics for Discussion and a Free Quiz on A Single Shard by Linda Sue Park.

A Single Shard is the Newberry Award winning novel by Linda Sue Park. In this novel, Tree-ear is an orphan who lives under a bridge with Crane-man, a physically disabled man who took him in when Tree-ear was only a small child. Tree-ear is fascinated with the potters in his village, especially Min, and often watches them work. One day Tree-ear goes into Min's yard and investigates the work that he has drying in the sun. When Min comes out and startles Tree-ear, he drops and breaks a box. To pay for his mistake, Tree-ear offers to work for Min for nine days. Nine days turns into eighteen months, changing both Tree-ear and Min's life forever. A Single Shard is a story of self-discovery and hope that will inspire readers of all ages.

Tree-ear will often stop at the home of Min, a potter in town who throws his clay in the backyard where Tree-ear can watch without being seen. As Tree-ear watches, he imagines what it would be like to learn to throw a pot. One day, Min has left several pieces of his work in the yard. Tree-ear sneaks over to have a look, so fascinated with a box that contains multiple smaller boxes that he does not hear Min come into the yard. Min begins to beat Tree-ear, accusing him of spying. Tree-ear drops one of the small boxes, shattering it on the ground. Min demands that he leave. Tree-ear begs Min to allow him to work for him for nine days in order to pay for the box.

As Tree-ear arrives for his first day of work, he feels a great deal of excitement at the idea of learning the craft of the potter. However, Min wants Tree-ear to cut wood for the communal kiln. For nine days, Tree-ear cuts wood for Min. When the nine days are over, Tree-ear returns to Min's and requests a continuing job. Min informs Tree-ear that he cannot pay him, but Tree-ear only wants to learn the trade therefore he does not expect payment. Min agrees, sending Tree-ear to the river for clay.

One afternoon word spreads throughout Ch'ulp'o that a royal emissary is coming to offer commissions to the best potters both in their village and another village down the coast. All the potters begin working at a fast pace in order to have their best work ready to display. During this time, Tree-ear notices some odd behavior in another potter, Kang. One night, Tree-ear sneaks up to Kang's work shed and sees him carving out flowers in the side of a vase and then filling the holes with colored clay. Tree-ear wants to tell Min what he has seen, but he is concerned that by doing so he would be stealing from Kang, so he waits.

The day the royal emissary arrives, all the potters set up stalls on the beach filled with their work. Min's is the smallest display but it is one of a few that earns extra attention from the emissary. The emissary leaves, but will return in a month to offer commissions. The potters who received extra attention before again begin working quickly to prepare new samples for the emissary. Tree-ear tells Min about Kang's inlay work. Min immediately begins creating inlays in his own pottery. However, after the pottery is fired in the kiln, it all comes out with brown stains that sometimes appear in the finish. Min breaks them all and prepares to start over. Unfortunately, the emissary arrives before he can create anything new. The emissary offers to give Min a commission if he can bring a sample to the capital city, but Min confesses that he believes he is too old for such a trip.

Tree-ear overhears the conversation between Min and the emissary. Tree-ear offers to take a sample of Min's work to Songdo for him, as a gift to Min's wife who has befriended and cared for Tree-ear over the past year. Once again, Min works quickly to create two melon shaped vases with intricate, inlaid flowers along the side. Crane-man is hired to create a basket that will carry the vases without breaking them. After taking care to be sure Crane-man will be cared for during his absence, Tree-ear sets off alone for the capital city.

Tree-ear walks for days alone, sleeping in the homes of strangers, or alone in the woods. When Tree-ear reaches the city of Puyo, he goes up to a mountain cliff where it is said a group of women jumped off to the river below to prevent capture by an invading army. At the top of this cliff, Tree-ear is attacked by two robbers who steal all his coins. The two robbers also take the vases and throw them over the edge of the cliff to the river below. After they have gone, Tree-ear rushes down to the river to check on the fate of the vases. Both vases are broken but one has broken in large pieces, allowing Tree-ear to take a single shard and continue his journey.

When Tree-ear arrives in Songdo, he talks his way into a meeting with the emissary. Tree-ear reveals his attack by the robbers and then shows the single shard. Despite the incredulity of the emissary's assistant, Min is offered a commission and Tree-ear is given safe passage home on a ship. Once home, Tree-ear goes directly to the home of Min to tell him about the commission. Min has news for Tree-ear as well. Crane-man died a few days before when a farmer's cart forced him over the side of the bridge and into the cold water. Tree-ear is devastated by this news and afraid for his own future. However, Min's wife tells him that he is to move in with her and her husband. Later, Min reveals that he intends to teach Tree-ear, now known as Hyung-pil, the art of pottery.

More summaries and resources for teaching or studying A Single Shard.