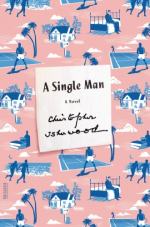 Christopher Isherwood
This Study Guide consists of approximately 53 pages of chapter summaries, quotes, character analysis, themes, and more - everything you need to sharpen your knowledge of A Single Man.

This detailed literature summary also contains Quotes and a Free Quiz on A Single Man by Christopher Isherwood.

The following version of this book was used to create your study guide: Isherwood, Christopher. A Single Man. Simon and Schuster, 1964.

• Note that A Single Man eschews novelistic conventions such as chapter breaks in order to articulate an unbroken, uninhibited stream of consciousness narration; as such, your study guide has been divided into sections according to page numbers and to specific narrative movements. In order to ensure that it is possible to follow the analysis within this guide regardless of the copy to which the reader refers, each section title will therefore be comprised both of that section's first few words (e.g. Section One reads: "Waking up begins with saying am and now") and the page range.*

A single man wakes up early in the morning one day near Christmas, in a little suburb by Los Angeles, California; this is where Christopher Isherwood's novel begins. The man is named George; he is middle-aged, an expatriate, an Englishman, and a professor of English at a state college just across the freeway. Full of intellect and humor, a passionate fellow with a slight sense of mischief, George is consumed with grief over the recent death of Jim — the young man he lived with and has loved for the past ten years. Nevertheless, George resolutely persists in the routine of his daily life, which starts here, as always, in the mornings, in bed.

After he wakes, he bathes; and after he bathes, he cooks himself breakfast. And all the while the narrator — a distant yet omniscient third-person speaker — describes George's morning and his first moments of consciousness, which are haunted, wholly, with reminiscences of Jim. For everything reminds George of Jim: the smallness of their house, which forced the two to press up against one another while walking through the hall; the eggs he makes for breakfast, which were Jim's favorites; the families that live adjacent on Camphor Tree Lane, whose attempts at friendliness and conciliation only underscore George's loneliness. Eventually George drags himself out and into his car and heads to work.

While driving on the freeway, George's mind drifts — straying from subject to subject. He thinks about the ocean, and then about an under-construction high-rise which will obstruct his view of this ocean from the freeway; he thinks about a local newspaper campaign against sexual deviants, of which he is one — gayness is, after all, unorthodox in the mid 1960s; he thinks about organized crime, and orchestrating mass murders — anything but Jim. Shortly he arrives at San Tomas State College, parks his car, and prepares for his Freshman lecture on the Modern Novel. His students are not the most intelligent, though he finds their responses to Aldous Huxley's "After Many a Summer" endearing and imbecile in equal measures; and while he lectures, he thinks of the students in the front row whom he admires, despite it all. Some such students are Russ Dreyer, Sister Maria, and Kenny Potter, who is attractive and intelligent in a non-academic way, and who sits with his Japanese girlfriend, Lois. He brings the lecture to a close with an abstract tirade against minorities, and then heads to his office to deposit his things. On his way out, he runs into Kenny, and the two walk to the bookstore together — Kenny because he wants to buy a pencil sharpener, and George because he enjoys the company. The two flirt mildly, but George chooses to ignore that valence of their connection. Following this, George goes to the faculty dining hall and eats a quick lunch with fellow professors Grant Lefanu and Cynthia Leech, before getting in his car and driving to the San Tomas State Hospital.

Arriving at the hospital, George takes the familiar route to the top floor to visit Doris — a crippled and ungainly woman who, it is revealed, was Jim's female lover, and was in the truck with Jim when he was hit. George does not quite know why he so frequently visits Doris, but comes to realize it is because she is the sole extant connection he has to Jim. After departing, George dawdles, not wanting to go home; so instead he heads to the gym and works out, even though today is not one of his usual gym days. After, George goes to the grocery store and decides to visit Charley; he heads to her home in time for dinner, and the two eat and drink and converse about a variety of things, including Charley's ex-husband, their perspective on home, and what it means to be in love. Charley is also English, and so the two get on quite well; it is revealed that Charley was George's former lover, and her company makes him feel temporarily less alone. Yet still, George cannot help but feel sentimental. He leaves her home a little before midnight and goes instead to a bar by his house called The Starboard Side. There he runs into Kenny from class, and the two drink and flirt for hours before deciding to skinny dip in the ocean. After, they go to George's home and continue to flirt, though nothing happens because George passes out and Kenny puts him to bed, writing his professor a note that suggests they should go on a date sometime. However, this date will never happen, for in the middle of the night, as he dreams of Jim, George has a heart attack and passes away.

Thus a single man wakes up at the start of the novel and sleeps at its end.

More summaries and resources for teaching or studying A Single Man.