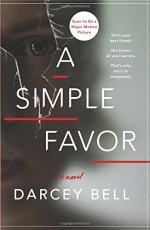 This detailed literature summary also contains Quotes and a Free Quiz on A Simple Favor by Darcey Bell.

The following version of this book was used to create this study guide: Bell, Darcey. A Simple Favor. Harper, 2017. Paperback Edition.

Stephanie, the widowed mother of five-year-old Miles and a mommy blogger, is lonely living in the suburbs until she meets Emily, the mother of Nicky, Miles’ best friend. Emily personifies what Stephanie would like to be. She is a mother, has a high-profile job in public relations at a famous fashion house and is married to Sean, a successful British business man. Stephanie comes to think of Emily as her best friend and one day performs the simple favor of picking up Nicky after school because Emily has to work late and Sean is on a business trip. Everything is fine until Emily does not come to pick up Nicky. The Emily Stephanie knows would never not pick up her child, so Stephanie begins to worry that something has happened to her. Her worries intensify when Emily does not answer her phone or respond to text messages. After an initial investigation, Stephanie convinces herself that she must have misunderstood Emily because she seems to be the only one who is worried.

However, after a couple of days go by and Stephanie still has not heard from Emily, her worry resurfaces. The narrative opens as she writes to her blog readers asking them to notify her if they see Emily. Sean also becomes worried when he returns. The police get involved, but based on the initial evidence they find, they conclude that Emily left because she needed a break from her life. Later, they determine that she is dead because they find a corpse at Emily’s family’s cabin whose DNA matches Emily’s. They also find a ring that belonged to Sean’s mother. In addition, readers learn that an insurance policy was taken out on Emily not long before her disappearance with Sean named as the beneficiary. The police question him, but there is no evidence that he killed her.

The news of Emily’s death causes Stephanie and Sean to spend more time together because of Nicky. Stephanie becomes attracted to Sean and Sean asks Stephanie to move in with them because he needs someone to help with Nicky and having her around helps him cope with Emily’s death. Her apparent death shocks him because he thought that that Emily’s disappearance was part of an insurance fraud plan that she devised and he agreed with. According to the plan, Emily would disappear, Sean would collect the money, and he, Emily, and Nicky would live in a paradise where no one would ask questions about their existence. What he does not know is that Emily is still alive. The dead woman is Emily’s twin sister, Evelyn, but Emily never told Sean that she had a sister. Stephanie finds out about Emily’s twin, however, as she tries to find out more about Emily after her death. The insurance agent, Isaac Prager, also finds out about Evelyn and goes to talk to Sean while Stephanie is there. He tells him that he wants to investigate further as he suspects that the dead woman is Evelyn and not Emily.

Emily did indeed disappear because of the insurance fraud plan. She has used Stephanie because she needed someone to take care of Nicky while she was gone. In addition, she causes Evelyn, a substance abuser, to kill herself. Things are going according to plan until she realizes that Stephanie is trying to take her place by living in her house, acting like a mother to Nicky and sleeping with Sean. She makes herself known to Sean, Stephanie, and the boys. Then she decides to take revenge out on Sean and use Stephanie to help her do it. She kills Mr. Prager and gets Stephanie to help her dispose of the body to make it look like an accident while also planting some of Sean’s hair. She tells Stephanie that Sean abused her and that is why she had to leave. Stephanie believes her and posts this information on her blog. Sean’s mentor at his job sees the post and helps Sean by giving him an assignment in Ireland. Emily is happy that Sean has had to run away. She moves back into her house, resumes her role in Nicky’s life, and goes back to work. Stephanie worries that there will be consequences for their actions, but time goes by and nothing happens. Then, one day, the police pay Emily a visit. It turns out that someone recognized Sean’s mother’s ring which was discovered near Isaac’s body. Emily had asked Stephanie to bring it to her and realizes when she must have accidentally dropped it. She is calm, though, and manages to convince the police that they should be talking to Stephanie and not her. After they leave, she packs and decides that it is time for her to leave with Nicky. The narrative, which has been told through the perspectives of Stephanie, Emily, and Sean with an emphasis on Stephanie’s perspective, provided through her blog posts and her narrative outside of the blog, ends as Emily prepares to leave.