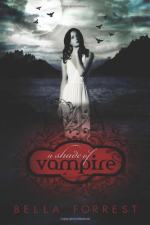 A Shade of Vampire Themes & Motifs

Vampires are one of the main threads in the story. The Novaks have been vampires for over 500 years. They have managed to escape the Shadow Hunters and to thrive in a community of their own making.

Derek Novak hates being a vampire. He tells Sofia that when his father returned home, he knew he was a vampire yet Derek could not kill him. That night, Derek, Vivienne and Lucas were turned. Derek feels the biggest sacrifice he has made is giving up a sense of humanity. Derek hates what he has to do to survive. A sense of humanity is one of the things that drew Derek to Sofia in the beginning. Derek does not want to turn Sofia into what he has come to despise.

Many people look upon the vampires as animalistic savages. Ben makes that point clear to Sofia. Sofia tries to tell...

A Shade of Vampire from BookRags. (c)2022 BookRags, Inc. All rights reserved.