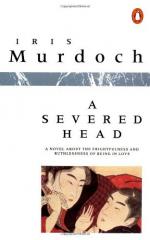 "I like the way in which she accepted our relationship. Only with a person so eminently sensible could I have deceived my wife."
Page 7

"There was a desperate fierceness in her manner, but there was also fear, fear of my reactions. It was the fear which began to convince me and I felt the first touch of nightmarish terror."
Page 31

"In the creamy white smock, self-consciously old-fashioned, my brother seemed dressed to represent a miller in an opera."
Page 48

"Last night, strangely enough, I had not felt too dejected; but this, I reasoned out, was because of a particular illusion, which had been fostered by the...