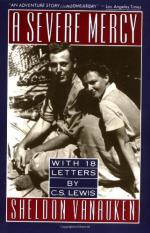 Plot Summary
+Chapters Summary and Analysis
Prologue: Glenmerle Revisited
The Shining Barrier (The Pagan Love)
The Shadow of a Tree
Encounter with Light
Thou Art the King of Glory
The Barrier Breached
The Deathly Snows
The Way of Grief
The Severe Mercy
Epilogue: The Second Death
Free Quiz
Characters
Objects/Places
Themes
Style
Quotes
Topics for Discussion
Order our A Severe Mercy Study Guide

Sheldon Vanauken
This Study Guide consists of approximately 31 pages of chapter summaries, quotes, character analysis, themes, and more - everything you need to sharpen your knowledge of A Severe Mercy.

This detailed literature summary also contains Topics for Discussion and a Free Quiz on A Severe Mercy by Sheldon Vanauken.

Sheldon Vanauken's A Severe Mercy is the story he tells upon reflection of the love he had with Jean Davis, or Davy as she would come to be called, and the evolution they experienced both as a couple in love and as individuals. It is, as much as it is the story of their love, the story of their coming to know and love Christianity and its Jesus.

The two meet in their late teens and are immediately close. They sit engrossed in conversation for hours at a time, and eventually their conversation moves to what their lives would be like if they were to marry. They imagine a life of total sharing, centered on all the beautiful things they love, like poetry, literature, the sea, good company, and art. Eventually, they secretly marry, and spend a happy summer living at the estate where Van grew up, establishing the memories that would be the folklore of their love.

World War II comes and calls Van away from Glenmerle to Hawaii, and fortune allows Davy and he to remain there throughout the war. There is a moment in that era when Van reconsiders the question of Christianity as a valid faith, since so many intelligent and educated people swore so adamantly by it, and another in which the two realize the ease with which they could be separated from each other forever.

Following Hawaii, there is the time they spent living on a sailboat and realizing a long-held and hard-attained dream of theirs. They explore the Florida Keys and all the ocean surrounding while Van writes for a yachting magazine. Innocent days fill themselves with moments of complete joy and "inloveness", as they coined it, even transcending time itself. Yale follows, and their time at Horsebite Hall when their dogs Gypsy and her Flurry become characters, and Davy paints the first omen painting of the spiritual searching that has begun in her. Next follows another summer of sailing, and then they are finally off to realize their dream of studying at Oxford in England, a place they both loved.

Oxford is full of Christian friends and is the setting for their Christian exploration, quite thrust on them by the reality of Jesus Christ in the lives of the joyful and peaceful Christians they continued to meet. Christian thinker C.S. Lewis becomes a character as he is a don of Literature at Cambridge, and not only the author of some of their favorite Christian books, but the one to lead Van and Davy into the kingdom of God through a series of letters and close friendship. The two experience a flowering of spiritual passion and understanding, and revel in the liveliness of the group of Christian friends. There is, at Oxford, a continuous and passionate conversation about all things spiritual, as well as worship in the form of art, music, poetry and fellowship. Two lovers are very happy.

Following Oxford is Virginia and Lynchburg College, where Van would take a teaching position for the English department. A group of students forms and becomes another thriving Christian discussion group, and Davy dives into that ministry. Van, however, wishing for time for the two of them to go back to just being in love like it had been before, resents Davy's so passionately seeking after God, and recognizes that his position as the focus of her life has been usurped.

Soon, Davy falls ill, and while she is granted another full year, and the gift of dying alert and in a time when the two of them have been enjoying each other deeply, and preparing with plenty of time to say goodbye, she succumbs and dies. Van, as he mourns her, comes to see that her passing was the answer to her prayer for his soul, since she was the thing keeping him from throwing himself into seeking after God. He also comes to see that his own prayer is answered in his death, since what he wanted while she was alive was only her happiness, and in seeing him move into a deeper walk with God, she is completely and eternally happy.

More summaries and resources for teaching or studying A Severe Mercy.