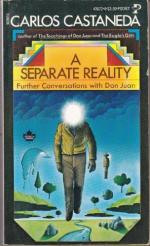 Carlos Castaneda
This Study Guide consists of approximately 39 pages of chapter summaries, quotes, character analysis, themes, and more - everything you need to sharpen your knowledge of A Separate Reality.

This detailed literature summary also contains Topics for Discussion and a Free Quiz on A Separate Reality: Further Conversations with Don Juan by Carlos Castaneda.

Carlos Castaneda (December 25, 1925 - April 27, 1998) recounts how he had met don Juan in 1961, ten years before the writing of this book. Don Juan is a Yaqui Native American from northwestern Mexico who is also a shaman or sorcerer, as Castaneda describes him, and also a very old man who is in excellent physical shape.

On April 2, 1968, Castaneda visits don Juan in central Mexico. Castaneda presents his first book to don Juan, telling him that he is the subject. The book draws a bit of curiosity but not much. The two wait on a park bench for one of don Juan's friends, and during this time Castaneda tells a story about poor street children who had offered to shine shoes and had eaten leftover food at a restaurant with outside tables. The author expresses sorrow for the street children, but don Juan objects. He maintains that Castaneda cannot possibly know if one life is better than another because the author has yet to learn how to properly see the world as a sorcerer, or man of knowledge.

Don Juan instructs Castaneda that when one sees like a sorcerer, people appear to be luminous eggs. He brings the author to a mitote—a meeting in which people ingest peyote—and reassures Castaneda that he should not fear the peyote. Castaneda does not in fact fear the experience but is reluctant to give up what he considers clarity, or his usual perception of the world.

During an earlier visit to Mexico, Castaneda visits Vicente, a friend of don Juan's, and Vicente gives the author herbs to plant in the desert. This leads to a dangerous encounter with the allies of Vicente, but Castaneda escapes by driving away quickly. Don Juan tells the author, after Castaneda relates the story to him, how dangerous such an encounter is when one is not prepared. The next logical thing to do is to prepare to meet an ally, which becomes Juan's next effort with his apprentice, Castaneda.

On the way to the mitote, don Juan talks about death and how it always approaches a person in life. At the mitote, even though don Juan does not insist that Castaneda ingest peyote, the peyote spirit known as Mescalito hovers over Castaneda during the ceremony, but he only perceives this event as a buzzing in his ears and a pink light that casts upon the faces of the mitote participants. Don Juan later explains the visitation and how gently

Mescalito treats Castaneda. In a later mitote, Castaneda witnesses Mescalito taking over a young man named Eligio and teaching him his peyote song. The author is now ready for the next phase of learning to see like a sorcerer.

Don Juan insists that Castaneda smoke psychoactive mushrooms for the next phase. Before smoking, the author witnesses another sorcerer named Genaro doing impossible acrobatics at a waterfall. Don Juan explains that Genaro uses his luminous filaments that emanate from his navel region. These filaments are highly developed into long tentacles, and with these Genaro jumps from rock to rock and maintains his balance.

Upon first smoking the mushrooms, Castaneda encounters the guardian, a being that appears to the author as a monster. Since Castaneda fails to overcome the guardian, don Juan tries another approach. He tells Castaneda that the author must live like a warrior, which involves the development of will and patience. By will the sorcerer means to always be in control of situations, and by patience he means knowing when and when to not take action.

The next smoking experience reveals to Castaneda don Juan's face as being made of luminous filaments. Don Juan then takes Castaneda to meet a water spirit, which goes well enough. This opens the way to Castaneda's seeing of water with the oversight of don Juan. The sorcerer uses his spirit catcher—a string with which he produces sounds of varying pitch—in order to help the process along. Castaneda sees the water in the way of a sorcerer and actually travels along a stream, but don Juan has to pull him away. The water nearly traps Castaneda forever.

After urging Castaneda to live more like a warrior, don Juan attempts to introduce him to his ally through smoking the mushrooms. Castaneda sees the ally but must look away quickly. The author is not ready yet to control the power of the ally, and the ally has the potential of killing Castaneda.

The author does see the ally again and learns something about where he will find his power. He spends a night alone with the ally, which is very frightening. Don Juan and Genaro demonstrate some of their powers to the author before Castaneda leaves for Los Angeles, where he compiles his field notes into the book.