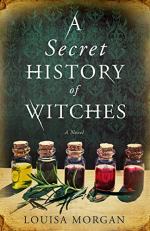 A Secret History of Witches Quotes

Importance: In this quote Nanette thinks about the limits of her power and her ability to keep Michael Kilduff, the Irish farrier who visits Orchard Farm. Nanette sleeps with Michael and gets pregnant with Ursule, who will reluctantly inherit the power from her mother. Nanette's decision to sleep with Kilduff and to keep the child although Ursule is raised out of wedlock, passes on the craft to the next generation and keeps her line from dying out. This quote also shows the different scopes of the women's power. While grand-mere Ursule had a great deal of power, Nanette has only limited power.

She felt victorious, and she savored the feeling, but she knew it was a treacherous emotion. It was not over. It would never be...
-- Nanette (The Book of Nanette, Chapter 5)

A Secret History of Witches from BookRags. (c)2023 BookRags, Inc. All rights reserved.