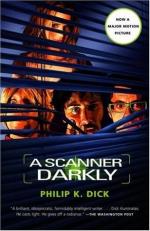 This detailed literature summary also contains Topics for Discussion and a Free Quiz on A Scanner Darkly by Philip K. Dick.

A Scanner Darkly is a story about drug abuse in Orange County, California. The novel begins with an account of one addict's strange belief that he is infected with biting bugs. Jerry Fabin's delusion soon spreads to his friends, who are also druggies. When another druggie, Charles Freck, visits Fabin, Freck ends up collecting bugs in jars with his delusional friend. After leaving Fabin's house, Freck runs into Donna Hawthorne, a drug dealer, at the mall. He recognizes Donna and arranges to buy some Substance D from her. Substance D, also known as slow death, is a popular yet deadly drug that is believed to be created synthetically in labs.

Freck knows Donna as the girlfriend of Bob Arctor. What Freck does not realize is that Arctor is an undercover narcotics agent. When the reader is first introduced to Arctor, he is giving a speech to a local Lions Club. Arctor is wearing the disguise of a scramble suit to hide his identity. A scramble suit is a new invention that projects a different identity each nanosecond. Arctor is giving a speech about the dangerous world of illegal drugs. He departs from his memorized speech, in an effort to inspire sympathy for addicts. Arctor gets summoned to a meeting at police headquarters. Before he goes to headquarters, he calls Donna to make a drug buy. Donna says that Arctor's roommates told her that his cephalochromoscope, a device used for relaxation, is broken and appears to have been sabotaged.

One of Arctor's two roommates, Jim Barris, shows Charles Freck how to extract cocaine from sunburn lotion. Barris has a home drug lab and plans to write a book on how to make drugs legally at home. Barris says that Freck can use the cocaine to seduce Donna, who is a known coke fiend. Meanwhile, Bob Arctor gets assigned to look for a certain drug dealer in New-Path, a rehab clinic. The New-Path staff hurls insults at Arctor, which is apparently part of the standard rehab treatment. Arctor leaves feeling shaken, without having determined whether the drug dealer is hiding there.

When Arctor's true identity is hidden, he is known as Special Agent Fred. At his regular meeting with Hank, another drug agent in disguise, Fred learns that someone has been making anonymous calls alerting the police to the fact that Bob Arctor is a suspicious character. Hank and Fred always wear scramble suits when they meet, so Hank does not know that Fred is really Arctor. He assigns Arctor to spy on himself.

Arctor must keep his two roommates, Barris and Ernie Luckman, out of the house one afternoon so that the police department can send a squad into his house to set up surveillance equipment. The three men set off to look at a rental cephalochromoscope. Arctor ditches his roommates and visits Kimberly Hawkins, a young junkie who lives in the projects. Arctor gets involved in a domestic dispute that Kimberly is having with her boyfriend Dan. On the way home, Arctor's car goes out of control. It appears to have been sabotaged. When he has a bad reaction to some drugs that Barris supplies, Artor starts to feel that Barris is out to get him.

Arctor gets summoned to Room 203 at police headquarters. Two medical officers explain that Arctor shows signs of split-brain dementia, caused by overuse of Substance D. They do some psychological tests on Arctor.

From a police-commandeered apartment a few blocks from his home, Arctor begins watching the holo-scans produced by the surveillance equipment in his home. Whenever he goes to the safe apartment, he wears his scramble suit and takes on the identity of Secret Agent Fred. While watching a live feed, Fred sees Barris passively observe as Luckam almost chokes to death on some food. Arctor grows more suspicious and fearful about Barris's personality.

Arctor goes to Donna's apartment, where the two smoke hash and make plans to see a movie at a drive-in theater. Arctor tells Donna that he loves her, but when tries to hug her she refuses and tells him that he is ugly. Feeling angry, Arctor gets up to leave. Donna apologizes and explains that he is not a person she could see herself marrying. Later that night, Arctor brings home a little needle-freak named Connie for sex. In the darkness, he imagines that she transforms into Donna.

Watching holo-scans the next day, Arctor watches the tape of Connie sleeping and sees her face appear to morph into Donna's. He begins to wonder whether he is losing his mind. The holo-scans also reveal that Barris is setting Arctor up for nonpayment of a bounced check. Barris pretends to be Arctor when a creditor calls and refuses to pay the money owed.

Arctor learns the name of the creditor, a locksmith, and tracks down the locksmith's shop to pay the money owed and keep him out of legal trouble. He is surprised by how precise Barris's forgery of his signature is on the check. Then, Arctor remembers that he himself actually wrote the check, for a copied key during a night of heavy partying.

At this point in the novel, Arctor begins reciting German poetry at odd moments. He is not aware of the times that he speaks in German. The German is presumably stored in his memory from childhood, when Arctor lived with an elderly relative who often read German books aloud.

Charles Freck decides to kill himself, because he is depressed about his drug addiction. However, his plans go wrong when he takes the wrong kind of drugs. He realizes that he has overdosed on psychedelics rather than barbiturates. A creature from another dimension appears and reads Charles's sins from a long scroll. The reading will take one thousand years.

In Hank's office, Fred finds Barris. Barris has come forward as the anonymous caller who alerted the police to Arctor. Barris plays forged tapes of Arctor and Donna plotting to steal weapons from the United States military. Hank orders Barris to be arrested for giving the police false information. Then Hank tells Fred that he is being discharged of his duties and fined for developing a drug addiction.

Donna picks Arctor up and drives him to New-Path. Along the way, they stop at the side of the road to smoke some hash. A police officer pulls up and Donna shows him her badge to get him to leave. According to her identification, Donna is an undercover agent for the federal government.

At New-Path, Arctor is called Bruce, because he cannot remember his real name. A counselor named Mike Westaway befriends him. One day Mike leaves New-Path on an errand and meets with Donna to discuss their plans for Arctor. They want Arctor to find out New-Path's role in the creation of Substance D. Both Donna and Mike feel bad for their role in setting Arctor up to become an unwitting spy Mike gets Arctor reassigned to work on a Napa Valley farm that is run by New-Path. On the farm, Arctor sees blue flowers hidden among the corn crops. He realizes that the flowers are Substance D, and he hides one in his shoe to show Mike when he will see him again, on Thanksgiving.