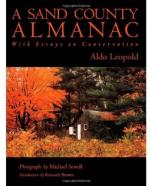 Aldo Leopold
This Study Guide consists of approximately 40 pages of chapter summaries, quotes, character analysis, themes, and more - everything you need to sharpen your knowledge of A Sand County Almanac.

This detailed literature summary also contains Topics for Discussion and a Free Quiz on A Sand County Almanac by Aldo Leopold.

A Sand County Almanac is a wonderful book about conservation and the need for a human conscience towards the use of land. The first twelve chapters are great descriptions of nature and the way plants and animals interact with each other for survival. The following chapters are about different places that the narrator has visited, and he takes the reader through amazing journeys through his memories. The final chapters are about the need to create a social conscience towards the environment and the land. Land ethic is the main argument of this book. It states that people should care less about what they can gain monetarily from the land, and more about what they can gain in the long run from engaging in long term sustainability of it.

The first few chapters are beautifully written. The reader can really understand the importance of each animal in the food chain, and how each acts in order to survive and sustain their own species. In the winter, small woodland animals seek the shelter of the trees and live below ground to protect themselves from the frost. A small rodent comes out of his hole just to see if the winter is almost over, and if any signs of spring are present. If he is lucky, he will remain unseen, and the hawk that flies overhead will miss him. Everything in the environment works by chance, and the second an animal slips up, it risks losing its life. The narrator also takes the reader through winding rivers in a canoe and explains that the river is curvy and long as it wants to avoid being dumped into the ocean with the rest of the world's water. It wants to enjoy being on land and seeing the coyotes and the deer that come out with their young to drink from it.

Finally, he talks about conservation and the scientific aspect of it. More than just scientific, it is a social need. It cannot exist without people who love and care for the environment. Everyone needs to develop a social conscience and respect the environment. There are two different types of conservation in this society. Those that want to conserve for economic gain, such as loggers, and those that want to conserve for the good of the different ecosystems in the world. The second is the optimal way of thinking, but it doesn't present any monetary benefits which is why it isn't the most sought after way of dealing with conservation. The government has not done enough to protect land, because they don't understand how to. The scientists don't even know how. The only way that the government can do anything to protect the land is if it places a monetary value on the environment. Anything that doesn't bring an economic gain faces extinction, and that is the main negative argument of this book. It is a sad truth, but more and more species are being lost everyday. Most of them are unspectacular, and people don't care about them. The only thing that people can do is to be cautious of any damage done to land. This will help scientists buy time to figure out what needs to be done. If they aren't given the chance, then the land will suffer. People will be doomed to face inevitable self destruction from progress that has done so much, and is hurting people at the same time.

More summaries and resources for teaching or studying A Sand County Almanac.