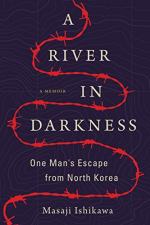 Masaji Ishikawa
This Study Guide consists of approximately 47 pages of chapter summaries, quotes, character analysis, themes, and more - everything you need to sharpen your knowledge of A River in Darkness.

A River in Darkness Summary & Study Guide includes comprehensive information and analysis to help you understand the book. This study guide contains the following sections:

This detailed literature summary also contains Topics for Discussion on A River in Darkness by Masaji Ishikawa.

The following version of the book was used to create this study guide: Ishikawa, Masaji. A River in Darkness: One Man’s Escape from North Korea. Amazon Crossing, 2017. Amazon Kindle Ebook. First English Translation Edition. (Previously published in Japanese in 2000).

In the prologue, Masaji Ishikawa remembers the night he escaped from North Korea and the promise he made to his children to help them escape too. Born in Japan to a Japanese mother and Korean father, Ishikawa moves to North Korea with his family in 1960 when he is thirteen years old. Their move is part of a massive repatriation effort conducted by the North Korean and Japanese governments. Though they had been told that North Korea would be a paradise on earth, the family soon learns that it is just the opposite. As Japanese returnees, they are at the lowest strata of society. They live in extreme poverty with no chance of bettering their circumstances. Ishikawa works hard in school but soon learns that his fate is at the mercy of the government. In addition to poverty and food shortages, the family is the victim of other aspects of a totalitarian regime including ideological indoctrination, military brutality, and a lack of personal and intellectual freedoms.

As a young adult, Ishikawa is assigned to work on a farm but he and his father struggle to support his mother and younger sisters. At times, they receive small bursts of good fortune through some of Ishikawa’s father’s friends had made in Japan before moving, but these blessings are small and limited. One by one, the lives of their well-connected friends are destroyed and the family must figure out how to survive on their own. Two of Ishikawa's sisters get married and soon Ishikawa has an arranged marriage. It doesn't last long, but it leaves him with a son to raise on his own after his wife asks for a divorce. The basic necessities of life such as medicine and food are denied him and his family and he is reduced to begging around the village for someone to breastfeed his son. Ishikawa's mother dies in unhappiness and sorrow. Now thirty-one, Ishikawa gets married, but his family can't live together as his wife has to nurse her grandmother. After his nephew dies in infancy, Ishikawa sinks into depression and decides to live as a hermit.

He gets a job as a charcoal burner and moves away from his family. After his wife gives birth to his second child, he realizes that he can do nothing to support his family, no matter how hard he works. He tries to kill himself, but is recused by a coworker. A year later, he abandoned his hermit life and returns to his family. For years they struggle to find food and shelter, at times living without help from the government. Ishikawa and his wife have a third child and life continues in extreme poverty and starvation, through Ishikawa does everything he can to provide for his family and get slighter better jobs and secure somewhat better homes. When he is seventeen, his eldest son gets into trouble in the police, so Ishikawa sends him to join the military in the hope that the police won't find or look for him there. They part ways not knowing if they will ever see each other again.

In the mid-1990s, Ishikawa's father dies and so does the Great Leader Kim Il-sung. Throughout the early nineties, the already dire food situation gets progressively worse, partly due to the change in rule after the death of Kim Il-sung and partly due to environmental issues. Ishikawa and his family subsist on weeds and acorns as people die of starvation all around them and some even turn to cannibalism. Despite these circumstances, the brainwashed and indoctrinated population does not rise up against the government. Knowing that he and his family are on the verge of dying of hunger, Ishikawa decides to try to escape North Korea. He promises to get his family back to Japan as well if he succeeds, and knows he can get a job and send them money from there in the meantime. In 1996, Ishikawa makes it across the Yalu River into China where he is nursed back to health and helped by a local family.

In China, Ishikawa's situation is still dangerous as the Chinese government has an agreement with North Korea to return any captured defectors, who are then executed. With the help of his new friends, Ishikawa gets in touch with the Japanese government who confirm his Japanese citizenship. The Japanese consulate then embarks on a long process of bureaucratic negotiations to get Ishikawa out of China and back to Japan. Officially, they can't admit to helping him, but ultimately they succeed in getting him home to Japan in October 1996.

In Japan, Ishikawa is hopeful that he'll be able to rescue his family and send them money. However, no government officials are willing to help him and his case for his family in North Korea falls on deaf ears. He is keen to get a job and work hard, but he struggles to find decent work due to the economy, his background, his lack of education, and his limited work experience. Ultimately, he is forced to live on welfare and cannot send any money back to his family. He gets intermittent letters from them, through which he learns that his wife died and his daughter is on the verge of starvation. He gets another job and works from 5 am to 1 am to send her money, but she dies before it arrives. The letters from his family stop abruptly not long after, but he still hopes to rescue his surviving children.

More summaries and resources for teaching or studying A River in Darkness.

A River in Darkness from BookRags. (c)2022 BookRags, Inc. All rights reserved.