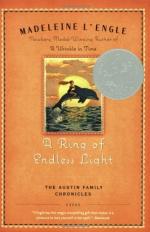 Madeleine L'Engle
This Study Guide consists of approximately 36 pages of chapter summaries, quotes, character analysis, themes, and more - everything you need to sharpen your knowledge of A Ring of Endless Light.

Seven Bay Island was the place where Grandfather lived. The Austin family came there for a couple few weeks every summer.

Leo chartered boats to and from the mainland. This is where people had to go to get to a decent hospital.

Adam and John did their scientific research at the Marine Biology Station.

The Austin family came to the island after spending a year living in New York.

Grandfather was once the pastor of a large church in Boston.

Grandfather had left his large church in Boston to go work at a tiny mission church in Alaska.

Grandfather had lived with a small tribe in a remote part of Africa for a while. While he was there, he helped them write down their history.

More summaries and resources for teaching or studying A Ring of Endless Light.

A Ring of Endless Light from BookRags. (c)2023 BookRags, Inc. All rights reserved.