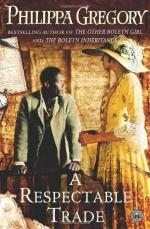 Philippa Gregory
This Study Guide consists of approximately 38 pages of chapter summaries, quotes, character analysis, themes, and more - everything you need to sharpen your knowledge of A Respectable Trade.

This detailed literature summary also contains Topics for Discussion and a Free Quiz on A Respectable Trade by Philippa Gregory.

Frances Scott is an orphan who is living as a governess and on the kindness of her aunt and uncle, Lord and Lady Scott, when she sees an advertisement posted by Josiah Cole, a merchant involved in the slave trade. Josiah is advertising for a governess, though he has no children of his own. The interview is interrupted early by Josiah, who then writes Frances a letter, proposing that she marry him. Frances still doesn't know the reason Josiah had sought a governess and it's much later that she learns that she is to be responsible for teaching slaves, newly captured and arrived from Africa, so that they can be sold at a premium rate as English house servants. The first batch of slaves arrives, two men, two very young boys, and a total of thirteen people. One of the men, Mehuru, is trained as a priest in Africa and lived himself as a member of the royal court. He is highly intelligent and soon becomes the acknowledged leader, learning the language quickly to become something of an interpreter between those less adept at the language and their new owners, including Frances.

Frances and Mehuru spend a great deal of time together and their attraction is almost immediate and is mutual. It takes very little time for Frances to realize that she has come to love this man who remains strong and proud despite his current situation. For her part, Frances comes to realize some important things about herself - including the fact that she is too weak to set out for a life with the man she has come to love because it would mean bucking social standards that she holds dear. Frances also fears the uncertainty of a life without her family name behind her and knows that if she leaves her husband, she will be cutting all ties with her family.

Mehuru sees nothing except his desire for freedom and his need to spend that freedom with the woman he has come to love. As he seeks a way to make her willing to take a chance with him, Mehuru faces the grim reality that he cannot force her to take this chance. When it's evident that Frances is going to die, Mehuru makes the decision to remain behind while the other slaves in the home flee. Mehuru is on hand for the birth of Frances' child, a son who greatly resembles Mehuru. With her dying breath, Frances instructs Mehuru to look for her last will and he discovers that in death she has done what she could not possibly bring herself to do in life - grant Mehuru and the other slaves their freedom.

More summaries and resources for teaching or studying A Respectable Trade.