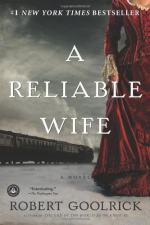 Robert Goolrick
This Study Guide consists of approximately 45 pages of chapter summaries, quotes, character analysis, themes, and more - everything you need to sharpen your knowledge of A Reliable Wife.

This detailed literature summary also contains Topics for Discussion and a Free Quiz on A Reliable Wife by Robert Goolrick.

This novel of sexual intrigue, betrayal, and redemption concerns the experiences of two principal characters, Ralph Truitt and Catherine Land, who at first appear to be very different but are ultimately quite similar. As the narrative gradually peels back the many layers of secrets and sufferings in the lives of each of these deeply troubled characters, it also explores themes related to the power of sexual desire, the unpredictable nature of humanity, and the dangers of isolation.

The narrative begins with businessman Ralph Truitt waiting, alone and cold on a wintry train platform, for his mail order bride to arrive. At the same time, that bride, Catherine Land, contemplates the challenge ahead of her: to suppress her own extravagant personality and desires in order to be the kind of demure "reliable" wife Truitt believes her to be. When she steps off the train, Truitt is surprised to see that she does not look like her picture and accuses her of lying. When she says she can explain, he says he does not want to hear it, and drives her home, planning to send her back in a couple of days. Just short of his house, an accident with the horses leaves him injured. With the help of a pair of servants, Catherine gets him inside and starts nursing him back to health.

As Truitt is getting his strength back, he tells Catherine his life story. He discusses his ambitious father, religious and ruthless mother, his adolescence of sexual debauchery, a sudden love for a penniless Italian aristocrat that ended in marriage, his return home upon the death of his father, taking over of the family business, and becoming a father to a girl who became mentally disabled following a childhood illness. He also describes how his wife took a lover and subsequently had a son with a lover and how he threw them out, while keeping the son whom he raised along with his daughter. His daughter however died and then his son Antonio eventually left. Catherine absorbs everything that he tells her and continues to pursue their relationship, aware the whole time of her plan to kill him and inherit his money. Eventually, Catherine and Truitt are married.

A few months after the wedding, Truitt sends Catherine to St. Louis to bring back Antonio since a pair of private detectives has found him. The first attempt fails, but when Catherine visits Antonio alone, the two immediately give in to their lust for each other and indulge in a passionate affair. Catherine reveals her plan to kill Truitt and Antonio urges her to do it quickly so they can share in the inherited money.

When Catherine returns home, she puts her plan into action, slipping small amounts of arsenic into Truitt's food and water. While Truitt is aware of what she's doing, he's also aware that he's fallen in love with her and that his despair at not getting Antonio back is so strong that he doesn't want to live. Catherine finds herself becoming fonder of Truitt, when she suddenly realizes she can't follow through on her plan and stops administering the poison. She nurses Truitt back to health, even while she summons Antonio to his bedside. Antonio comes, immediately starts taking advantage of his father's money, constantly argues with the steadily recovering Truitt, and repeatedly hints that Catherine has got to follow through on their plan. When her repeated refusals become too much for him, he rapes her, determined to force her into doing his will. Truitt catches him and, after Antonio reveals the past that he and Catherine shared, beats him. Their fight ends abruptly when Antonio, who has unwittingly fled onto a shallowly iced lake, falls through and drowns.

In the aftermath of Antonio's revelation and death, the now pregnant Catherine wonders what is going to become of her. Truitt confesses that he already knew about what happened in St. Louis and that it does not matter any more to him. Catherine tells him that she is going to have a baby and the two of them walk back into their home.

More summaries and resources for teaching or studying A Reliable Wife.