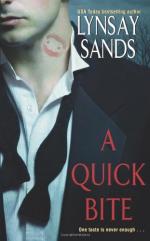 Lynsay Sands
This Study Guide consists of approximately 26 pages of chapter summaries, quotes, character analysis, themes, and more - everything you need to sharpen your knowledge of A Quick Bite.

This detailed literature summary also contains Topics for Discussion on A Quick Bite by Lynsay Sands.

The story begins with Dr. Gregory Hewitt willingly climbing into the trunk of Marguerite Argeneau's sports car and closing the lid. Greg, a psychologist, is going to be a birthday present for Marguerite's daughter, Lissianna.

Lissianna Argeneau is a 200-year-old vampire and the main character of the story. Chapter one begins with Lissi trying to find a willing blood donor from which to feed. Although Lissi is a vampire, she cannot stand the sight of blood. Lissi is out with friends and family for her birthday before going to her mother's house for a birthday party. Lissi hates the club scene and prefers to be with her family. Lissi's mother has arranged a special present for Lissi because she has hemophobia. She faints at the sight of blood.

Lissi appears to be about 26 years old. She has long blond hair and silvery blue eyes. Lissi, like the rest of the family as well as vampires in general, is very attractive.

Lissi had lived at home until her father's untimely death. After Lissi no longer has to live at home and waits to marry, she decided to go back to school to be a social worker while taking a job at a homeless shelter. Lissi thinks that it is important to help people. She also sees the shelter as a way to feed off the residents whenever possible.

There is a misunderstanding when Lissi believes that Greg is meant to be her dinner instead of a psychologist who may be able to help cure her hemaphobia. Despite Marguerite's good intentions, Lissi feels bad about Greg's captivity and the fact that he is going to miss his well-deserved vacation. Greg is held captive until Lissi decides to set him free. Marguerite is furious. Both Lissi and Marguerite go to visit Greg. Martine is the only one who can successfully control Greg long enough to take him back to the Argeneau house. Greg ends up being held captive again until his memory can be wiped. Meanwhile, Lissi and Greg become close and fall in love. When Lissi learns that her Uncle Lucian has arrived at the house, Lissi assumes the worst that Greg is going to have to suffer a brainwashing session with a council of three vampires. Greg says that he does not want to lose his mind. Once again, Lissi sets Greg free and they run from the house.

Greg decides that he wants to be Lissi's life mate. After Greg decides to be turned into a vampire, Lissi and Greg have a narrow escape from execution. Father Joseph, a priest at the shelter where Lissi works, has uncovered the fact that she is a vampire. Lissi's family figures out that Lissi is in trouble and does some undercover work to find her and Greg before it is too late. Lissi and Greg are saved and no one is harmed in the end. When all is settled, Greg is welcomed into the family with open arms.

More summaries and resources for teaching or studying A Quick Bite.