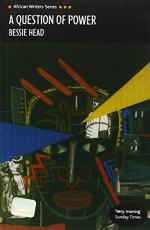 Bessie Head
This Study Guide consists of approximately 36 pages of chapter summaries, quotes, character analysis, themes, and more - everything you need to sharpen your knowledge of A Question of Power.

A Question of Power Summary & Study Guide includes comprehensive information and analysis to help you understand the book. This study guide contains the following sections:

This detailed literature summary also contains Quotes and a Free Quiz on A Question of Power by Bessie Head.

The following version of the book was used to create this study guide: Head, Bessie. A Question of Power. Heinemann, 1974.

The novel opens with a statement from Sello, who prefers to be identified less as an African and more by his individual soul and position amongst mankind. Sello is “twin souls” (11) with a South African colored woman named Elizabeth. As a child, Elizabeth learned that her mother, who was white, went insane and died in a mental asylum after conceiving her, Elizabeth, with the black stable boy. As an adult, Elizabeth marries a man and has a child. She eventually leaves her husband, and moves to Botswana with her son. She takes a teaching position in the small town of Motabeng.

When she arrives in Motabeng, she is visited in her dreams by a man named Sello. Sello also introduces her to a “wild-eyed Medusa” (38), who throws thunderbolts at her. Sello and Medusa subject her to a range of comments and criticisms; she has trouble sleeping. Eventually, Elizabeth breaks down and is taken to a hospital. When she is released, she takes a job helping to start a neighborhood vegetable garden.

At the farm, where Elizabeth is being taught new methods of irrigation, she meets a wide range of people, including an irritating Danish woman named Camilla. She also meets Kenosi, who becomes a close friend and confidante. At night, Sello and Medusa continue to torment her. One day, she realizes that Sello is physically shrinking. Elizabeth is overjoyed, until the next night Dan appears to her in her dreams. Dan is sexually aggressive, and as becomes apparent later, perverted. He likes to have sex with a variety of women on Elizabeth’s bed next to her.

Elizabeth makes a new friend named Tom, who is a Peace Corps volunteer from America. They discuss a number of subjects, including the Black Panthers and U.S. involvement in Cambodia. Unlike Sello, who identifies with the poor and suffering, Dan criticizes and mocks poor Africans; he also mocks Elizabeth for not being genuinely African. Meanwhile, Eugene—who runs the village vegetable garden—has started a local-industries project. The participating villagers display their crafts; Kenosi displays their vegetables from the garden to great amazement and enthusiasm from the crowd. Dan convinces Elizabeth that Sello has had inappropriate sexual relations with his daughter. Elizabeth breaks down again, and this time is sent to a mental hospital.

When she is released, Tom visits. She apologizes to Mrs. Jones, who promises to pray for Elizabeth. Dan and Sello continue to compete for Elizabeth’s attention. When Sello tells Elizabeth that, “Love is two people mutually feeding each other, not one living on the soul of the other like a ghoul” (197), Elizabeth has the emotional ammunition she needs to defeat Dan—who, it is revealed, is Satan. Sello explains how he has used Elizabeth to help defeat Dan and apologizes if the experience was painful for her.

Nonetheless, Elizabeth values her encounter with Dan, and credits him with teaching her self-control, love, and truth through his debauchery, hate, and falsehoods. The next day, she greets Kenosi, and they discuss the vegetable garden. Her son writes a poem that Elizabeth believes summarizes all her experiences. Elizabeth comes to a final, culminating revelation: “There is only one God and his name is Man. And Elizabeth is his prophet” (206). She sees now that she belongs to the “brotherhood of man” (206), and she falls asleep in peace.

More summaries and resources for teaching or studying A Question of Power.

A Question of Power from BookRags. (c)2022 BookRags, Inc. All rights reserved.