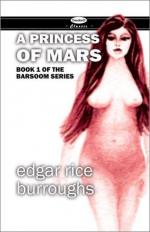 A Princess of Mars Summary & Study Guide includes comprehensive information and analysis to help you understand the book. This study guide contains the following sections:

This detailed literature summary also contains Quotes and a Free Quiz on A Princess of Mars by Edgar Rice Burroughs.

A Princess of Mars is a science fiction novel by Edgar Rice Burroughs, forms the first part of his Mars Trilogy, and follows the adventures of American Confederate captain John Carter on the planet Mars as he attempts to rescue the Martian Princess Dejah. When the novel begins, John has traveled to Arizona after the Civil War with fellow Confederate veteran James Powell. When James is killed by Indians, John seeks refuge in a cave – but a strange gas knocks him out and when he awakens, he is on the planet Mars.

Because of the gravity of Mars, John has immense strength he did not have on Earth. He encounters a race of green Martians, as well as Tars Tarkas, the second-in-command of his particular Martian tribe. Because John proves himself in combat with the Martians, he is given respect and standing among the Martians tribe. When the Martians attack a Heliumite expedition they believe to be martial, they capture a Heliumite human princess named Dejah Thoris. Dejah makes the case her expedition was to benefit all Martians, and the green Martians must make friendships with other races. John quickly falls in love with Dejah, and the two become very close.

However, when the Martian ruler of all Martians declares that Dejah will be killed in the great games, John, along with his Martian friend Sola, his Martian dog Woolah, and Dejah, make their escape. John is captured by the Warhoon Martians while protecting the escape of Dejah and Sola. In Warhoon prison, John meets and befriends a Heliumite human named Kantos Kan, who explains he is part of a search expedition for Dejah. John and Kantos are made to fight in the arena where he pretends to be dead so he can escape. Kanto, the winner of the fights, is given his freedom. The two meet up again in the enemy city of Zodanga, where it is learned Zodangan forces have besieged Helium. The war will end only when Dejah marries Prince Sab Than of Zodanga.

John then decides to travel to Helium, but along the way observes the Martian tribe of the Thark in combat with the Warhoon tribe. John joins the battle to protect Tars against the Warhoons, and Tars recognizes a friendship with John has happened. Tars then faces down the ruler of all Martians in a trial by combat, at which time Tars wins and becomes supreme ruler of all Martians. Tars and John then join forces to take Zodanga, and prevent the wedding between Dejah and Sab. During this time, Dejah confesses her love for John. John and the Martians then move on to save Helium, and a friendly alliance is struck between the Heliumites and the Martians. John and Dejah are married.

Nine years pass. One day, it is discovered that the atmosphere factories of Mars have been stopped, their attendants murdered. The entire planet will suffocate and die. John rushes to the factory to try to save the day, but passes out. When he awakens, he is back in the Arizona cave. He becomes wealthy from the gold there, moves to New York, and writes the manuscript which becomes the book the reader has just read. John hopes that Mars has been saved, and has a feeling that it has. He believes it is only a matter of time until he sees his Martian world again.

A Princess of Mars from BookRags. (c)2022 BookRags, Inc. All rights reserved.