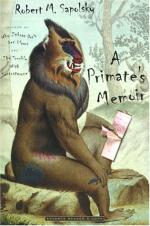 This detailed literature summary also contains Topics for Discussion on A Primate's Memoir by Robert Sapolsky.

A Primate's Memoir is the autobiography of American scientist and author Robert M. Sapolsky. He is currently the John A. and Cynthis Fry Gunn Professor of biology, neurology and neurological science at Stanford and serves the National Museums of Kenya as a research associate. Sapolsky is most famous for his work in neuroendocrinology or the study of the hormonal functions of the brain, with a particular focus on how stress affects the brain. A Primate's Memoir is built around Sapolsky's early life as a young research as an undergraduate, graduate student, postdoctoral research fellow, and professor during his time spend in Kenya doing his research.

The reader looking for a full autobiography of Professor Sapolsky will largely find tales of his experiences as a young scientist in Kenya and the tales of the baboon troop he studies and little more. But this is a far cry from saying that the book fails to be comprehensive in its profile of Sapolsky. It also accomplishes the task of depicting the social life not only of baboons but of many of the peoples of Kenya, particularly the Masai tribe that lived close to his baboon preserve.

A Primate's Memoir is divided into four parts, with each part covering an age period of both Sapolsky and his baboons. Part 1 is called The Adolescent Years because it explains how Sapolsky first came to Kenya and how he came in contact with his baboon troops and 'learned the ropes' as a researcher and as a resident of Kenya. Part 1 is also so named because many of his baboon characters are young at this time and will grow up with him throughout the book. Part 2 is called The Subadult Years largely because Sapolsky is still a student, though a graduate student doing work on his thesis. At this time, Sapolsky has made a number of friends in the Masai tribe and become a natural at avoiding the wide variety of scams and dangers in Kenya and his baboons are going through the process of overturning alpha males, getting pregnant and raising children.

Part 3, Tenuous Adulthood, follows Sapolsky's experiences as a postdoctoral student in Kenya. The baboons enter a period of instability as the ruling alpha, Saul, had been overthrown by a coalition of six baboons who then fought over who would be the next alpha. The stories of Part 3 have a similar instability and Sapolsky is also nearing holding an actual professorship rather than being a mere postdoctoral student. Part 4, Adulthood, has Sapolsky finally secure an assistant professorship and meet and marry his wife Lisa. A number of dangerous and exciting events top off A Primate's Memoir and several stories of Sapolsky and Lisa's happy experiences together in Kenya are discussed.

Ultimately the book ends with tragedy however, after being witty and amusing throughout. Chapter 29, The Plague, explains how Sapolsky's time with his baboons ended. Due to the negligence of local herders and their buyers, tubercular meat was in wide circulation in Sapolsky's area of Kenya. A baboon troop acquired bovine tuberculosis as a result and almost all of them died. A few years later, despite his best efforts, Sapolsky's baboons nearly all died as well, effectively ending his research of that particular group of baboons that he had known so well for so long.