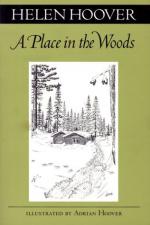 A Place in the Woods Summary & Study Guide

H. M. Hoover
This Study Guide consists of approximately 24 pages of chapter summaries, quotes, character analysis, themes, and more - everything you need to sharpen your knowledge of A Place in the Woods.

A Place in the Woods Summary & Study Guide Description

A Place in the Woods Summary & Study Guide includes comprehensive information and analysis to help you understand the book. This study guide contains the following sections:

This detailed literature summary also contains Topics for Discussion and a Free Quiz on A Place in the Woods by H. M. Hoover.

Adrian and Helen Hoover, anxious to get away from civilization, purchase a log cabin on the wooded shore of Lake Superior. No sooner do they purchase the property, however, then a terrible storm hits, seriously damaging the structural integrity of the dwelling. The Hoovers find a local man willing to repair the damage while they, their vacation now over, return to Chicago. Helen convinces her employer to allow her two months leave, whereupon they immediately return to their cabin.

The Hoovers, needing more room to work on the log cabin, buy a second, larger cabin nearby. In the process of making the log cabin livable, the Hoovers run across an injured mouse and her young. They keep the mouse as a pet until it finally passes away, while her young are left on their own. Instead of returning to Chicago, the Hoovers decide they would rather stay in their wilderness home. They quit their jobs.

The Hoovers find themselves unexpectedly short on funds when the moving bill proves more than expected. The larger cabin lacks insulation. With winter approaching, the Hoovers must return to the smaller log cabin. Coming back from town one day, their car full of supplies, the Hoovers are involved in a car accident. The automobile is totaled and they do not have the money to fix it in any case. After giving shelter to a wayward trapper, the Hoovers are rewarded with a tip for cheap firewood. They are thus set for the winter.

Winter brings heavy snowfall. The Hoovers entertain themselves by watching and feeding wildlife. Ade makes some money by doing mail-order woodwork. Helen tames a small weasel frequenting the cabin but the creature is nearly killed by one of the larger weasels knows as a fisher. Winter slowly recedes and spring animals return. The Hoovers again entertain themselves by feeding the animals. With spring arrived, the Hoovers find that they are again short on funds but this is remedied when Helen's family unexpectedly sends money.

The Hoovers begin buying food wholesale through the local lodge. They also begin raising chickens. Ade makes money by selling stationery decorated with his artwork. Helen sells a story to a naturalist magazine, finally becoming a published author. Ade wires the log cabin for electricity but a stray spark starts a fire in the ice house. The Hoovers, using a two-man bucket-brigade, spend several hours fighting the fire on their own. They manage to extinguish the blaze but are unable to save the generator.

In the aftermath of the fire, Ade and Helen discuss their reasons for fighting the fire. It was apparent that the fire would not spread but Adrian was under the impression that Helen misses electric lights, radio, and television. Helen explains that such things no longer matter to her. Adrian, surprised, admits that he also no longer craves these things. The Hoovers realize that something in their life has ended and that something new has begun. They are, at long last, free of civilization in their hearts.

More summaries and resources for teaching or studying A Place in the Woods.

A Place in the Woods from BookRags. (c)2021 BookRags, Inc. All rights reserved.