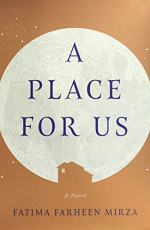 A Place For Us Summary & Study Guide

Fatima Farheen Mirza
This Study Guide consists of approximately 91 pages of chapter summaries, quotes, character analysis, themes, and more - everything you need to sharpen your knowledge of A Place For Us.

A Place For Us Summary & Study Guide Description

A Place For Us Summary & Study Guide includes comprehensive information and analysis to help you understand the book. This study guide contains the following sections:

This detailed literature summary also contains Quotes and a Free Quiz on A Place For Us by Fatima Farheen Mirza.

The following version of this book was used to create this study guide: Mirza, Fatima Farheen. A Place for Us. SJP for Hogarth. 2018. Hardcover Edition.

As Hadia prepares for her wedding, her brother Amar – who has not been home in more than three years – greets the various guests. His mother, Layla, is happy to see him there, but his father, Rafiq, is avoiding him for an unknown reason. Hadia meets with Amar and reveals that she chose her own husband and says that both she and Amar are disappointing their parents. She admits to herself, however, that she is nervous and prays that God lets her remember her happiness as she is brought up to the altar by her father and Amar. Layla is grateful for Hadia’s husband, Tariq, and gives thanks to God that the wedding is going smoothly. However, as Amar is approached by an old love named Amira, it is clear that this previous relationship may have been what tore Amar away from his family.

Part One follows three different narratives – Amar, Hadia, and Layla – in various stages of their life in random order. The reader learns that Layla and Rafiq’s marriage was arranged, and Layla was brought to America from India after she agreed to his proposal. Her entire life revolves around Rafiq and Layla is anxious if he ever has to leave overnight.

Hadia is a proficient student throughout elementary school who has a crush on an older boy named Abbas Ali, the only person to treat her brother, Amar, like a true friend. Amar, however, struggles in both his studies and in his relationship with his father, Rafiq. Amar trusts Hadia more than anyone, and the two share many secrets from their parents, such as Amar leaving class by pretending to be sick or times when they go outside together in the middle of the night. However, Hadia’s jealousy of her brother – as he gets much more praise for small achievements than she does for steady perfection – causes her to tell on Amar twice. Once hinting to Layla that Amar is hiding something from her (his relationship with Amira), and a second time when she tells Rafiq that Amar cheated on his spelling test to earn a pair of nice shoes. However, as Hadia grows up and her brother gets more distant, she realizes that she had been selfish in both of these instances and regrets it.

Things get worse when Abbas Ali passes away in a car crash. Hadia, who secretly had a crush on Abbas, and Amar, who was Abbas’ best friend, are devastated. This causes Amar many difficulties in school, especially after September 11th, 2001 when his friends turn on him and call Rafiq a terrorist. However, the real breaking point for Amar is when Amira breaks up with him after her mother, Seema, learns of their relationship. This shatters Amar’s confidence and drive to succeed. He turns to drugs and alcohol, further distancing himself from both of his parents as neither understands his issues. Rafiq calls Hadia home from medical school to try and deal with Amar. However, when Rafiq goes against her wishes and starts a fight with Amar, Amar shoves Rafiq into a glass frame. That night, Amar asks Hadia to lie to their parents about where he is going and runs away. However, unbeknownst to Amar, it is not Seema who discovered his and Amira’s relationship, but Layla, who used Seema’s fear of humiliation to convince her to stop the relationship. Layla believes Amira for Amar is a distraction and believes she is doing the right thing, not realizing that he is working for Amira.

Three years later at the wedding, Layla and Huda try to focus on the wedding while worrying about Amar who distances himself from them and the rest of the guests. When Amar meets Tariq, Amar decides that Tariq, an easygoing and intelligent man, will be the right husband for Hadia. After the ceremony where Hadia and Tariq are officially married, Amar meets Amira in an empty corridor. There, he learns that she did love him, but felt that she was holding him back from becoming who he truly was. However, when Amira reveals that it was Layla who told Seema about their relationship, Amar confronts his mother and claims that she went to Amira’s mother because she did not believe in him. He sees this as hypocritical, as Hadia got an extravagant wedding for picking her own husband. Layla tries to apologize, but Amar storms out and, after a talk with Huda, ends up getting drunk.

As the family prepares to take a picture, Layla asks Rafiq to go find Amar. He does so and tells Amar that he is too drunk to go back inside. Amar tells Rafiq that he does not think he will see Rafiq again, whether it be in this life, or the next one. Rafiq promises Amar that everything will be okay before they part ways. Back inside, Rafiq says he did not find Amar and tells Layla that they must focus on Hadia. Layla realizes that she was wrong to go to Seema’s mother, and just wants her children to be happy and safe no matter the decisions they make.

Nine years later, Rafiq is in the hospital with a brain tumor as he writes to Amar. Rafiq details various moments from the novel from his point of view in an attempt to show Amar that he loves him as well as apologize for things Rafiq feels he did incorrectly. Rafiq feels that he failed as a parent and wishes that Amar would come home. After surgery to remove the tumor, Rafiq spends a lot of time with his grandchildren. One of them, named Abbas, begins talking to a mysterious man on the phone who hangs up whenever anyone else tries to speak to him. Hadia believes this man is Amar because he asks about Rafiq, Layla, and the rest of the family. Rafiq asks Abbas to tell Amar that he is always welcome home and that Rafiq will wait for him forever if he has to. At the very end of the novel, Rafiq writes that he believes everyone, regardless of their decisions in life, will have a chance to reach heaven after death. He promises Amar that he will wait at the gates until he and his son can walk side by side, not as father and son, but as equals.

More summaries and resources for teaching or studying A Place For Us.

A Place For Us from BookRags. (c)2021 BookRags, Inc. All rights reserved.