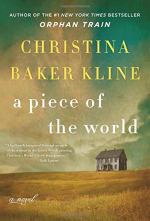 A Piece of the World: A Novel Summary & Study Guide

Christina Baker Kline
This Study Guide consists of approximately 35 pages of chapter summaries, quotes, character analysis, themes, and more - everything you need to sharpen your knowledge of A Piece of the World.

A Piece of the World: A Novel Summary & Study Guide Description

A Piece of the World: A Novel Summary & Study Guide includes comprehensive information and analysis to help you understand the book. This study guide contains the following sections:

This detailed literature summary also contains Quotes and a Free Quiz on A Piece of the World: A Novel by Christina Baker Kline.

The following version of this was used to create this study guide: Baker Kline, Christina. A piece of the World. William Morrow, 2017.

The novel, which is told in a nonlinear fashion and which uses first-person narration, is written completely in the present tense. The novel opens in 1939, on a farm in Cushing, Maine where middle-aged Christina Olson resides with her brother, Al. Christina meets a 22-year-old painter named Andrew Wyeth who comes to the house one day and says that he wishes to make paintings of it. The novel then transitions to Christina’s girlhood on the farm in the 1890s. Her father was a Swedish immigrant, and her mother was descended from a family that had lived in Salem before some of them had relocated to Maine. Christina contracts a mysterious illness as a girl that impairs her ability to walk and causes stiffness in her arms and fingers. The narrative then transitions to 1940. Andrew Wyeth has begun making regular visits to Christina’s house to practice his painting there, and they develop a friendly rapport.

In her girlhood days, Christina very much enjoys school, despite the bullying she receives due to her infirmity. She enjoys books, which allow her to learn and have adventures despite her restrictive infirmity. She also greatly enjoys the poems of Emily Dickinson. Her teacher, Mrs. Crowley, suggests that Christina should stay on for a few years after finishing school so that she can train to be a teacher and replace Mrs. Crowley. However, Christina’s parents veto this idea, saying that she is needed at the house to help with chores. At about the age of 20, Christina meets a man named Walton Hall, who has come from Boston for the summer to visit a cousin of his named Ramona Carle in Cushing. Walton is educated and comes from a financially comfortable family in Boston, and he and Christina quickly form a romantic attachment.

The narrative then transitions to the early 1940s. Andrew has been making regular visits to Christina’s house for years at this point. After Andrew’s father dies in an automobile accident, Andrew becomes even more committed to painting. He paints a portrait of Christina, but Christina says that she appears overly solemn in the portrait. The narrative then transitions back to the mid-1910s. Walton visits Cushing every summer to see Christina, and they exchange letters when he is in Boston. After four summers, Walton says that he wishes to marry Christina, but that he will have to convince his parents first, as his parents wish for him to marry a wealthy, high-status woman. However, after Walton’s fourth visit to Cushing, he writes no more letters to Christina, and Christina eventually finds out that he has become engaged to someone else. Christina says that she will never love again.

Christina feels very depressed in the wake of Walton’s abandonment, but she eventually feels well enough to make a trip for Boston in order to see the sights and finally get away from Cushing, if only for a short time. She enjoys her time in Boston, and she even sees some doctors there regarding her infirmity. However, they all tell her that nothing can be done to treat it. Sometime after Christina returns to Cushing, her father grows sick with a mysterious illness. There is not apparent treatment for it, but the father ends up spending almost all of the family’s savings on a supposed miracle cure that turns out to be a scam. Meanwhile, the local gossip, Gertrude Gibbons, begins pestering Christina and saying cruel things to her about the fact that Walton abandoned Christina. Gertrude eventually pushes Christina too far, and Christina vows never to speak to her again.

By the mid-1920s, Christina’s two younger brothers have moved away from the house, leaving only Christina, Al, and her parents. Al begins to spend an inordinate amount of time away from the house, and Christina is left on her own much of the time to take care of her aging, ailing parents. Christina eventually finds out that Al is seeing a woman. However, Al eventually leaves the woman in order to be present and helpful for Christina. The narrative then transitions to the late-1940s. Christina recounts some of the tragedies of her life story to Andrew, and Andrew consoles her. He then reveals to her his latest painting, which he calls, “Christina’s World.” It depicts a young version of Christina lying in a field in front of her house. Christina finds it beautiful, and she feels that it completely captures the most beautiful aspects of her life.

More summaries and resources for teaching or studying A Piece of the World: A Novel.

A Piece of the World: A Novel from BookRags. (c)2023 BookRags, Inc. All rights reserved.