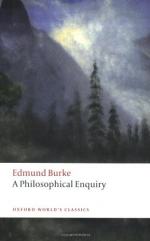 Edmund Burke
This Study Guide consists of approximately 30 pages of chapter summaries, quotes, character analysis, themes, and more - everything you need to sharpen your knowledge of A Philosophical Enquiry Into the Origin of Our Ideas of the Sublime and Beautiful.

A Philosophical Enquiry Into the Origin of Our Ideas of the Sublime and Beautiful Summary & Study Guide includes comprehensive information and analysis to help you understand the book. This study guide contains the following sections:

This detailed literature summary also contains Topics for Discussion and a Free Quiz on A Philosophical Enquiry Into the Origin of Our Ideas of the Sublime and Beautiful by Edmund Burke.

A Philosophical Enquiry into the Origin of our Ideas of the Sublime and Beautiful is philosopher Edmund Burke's short examination of human passions - what they are, and what excites them. Specifically, Burke focuses his study on two elusive concepts, the Sublime and the Beautiful.

Taste is first examined by Burke, defined as the faculty that makes judgments upon art and "works of imagination." Taste is determined by the Senses, the Imagination, and by own's own Reasoning or Judgment, working in concert. Taste is universal and Man only differs in it by degree mostly.

Next to be examined are pain and pleasure. These, along with the lack of either, indifference, are the basic states of being. They are both substantive, "positive" passions and are not simply defined as the lack of the other. Important are passions directed towards self-preservation, of which pain and its ally danger are the strongest. On the other hand are societal passions, further divided into sympathy (putting ourselves in someone's place), imitation (copying others, from which custom and tradition springs) and ambition (the desire to "one-up" or fellow man, to copy but to also better).

The Sublime is defined as a quality derived from fear and terror, both subsets of pain. Sublimity depends upon us regarding an object with horror, but not so much that we feel immediately physically threatened or are in severe pain. The Sublime is thus a state between indifference and total pain. Obscurity (not knowing an object perceived), powerlessness, privation, great magnitude (physical size), and infinite proportion (seeming to never end) are all factors contributing to the feeling that an object is sublime. These qualities can be transferred to senses other than sight.

On the other hand, Beauty is defined as a quality which provokes the passion called love. While proportion is not a factor in Beauty (and here Burke rejects centuries of thinking about the "ideal" human form), smallness, smoothness, gradual variation, delicacy, and cheerful colors are qualities contributing to Beauty.

Burke then attempts to find real physical causes for passions. He contends that Beauty (and love) put the body in a state of relaxation and relative inactivity, while the Sublime (and terror/fear) make the body tense and anxious. For example, a Sublime object may activate many more rods and cones in the eye and make them vibrate to a much greater magnitude than a thing of beauty, which would vibrate the cones in a much more nuanced and pleasing manner.

Burke's final subject is words, which can excite passions because they invoke in the listener's mind the ideas of the objects they, by custom, represent. However, words do not have to represent real objects, and in fact much of their power is derived by compounding ideas and arriving at exciting concepts that do not exist in the real world.

A Philosophical Enquiry Into the Origin of Our Ideas of the Sublime and Beautiful from BookRags. (c)2022 BookRags, Inc. All rights reserved.