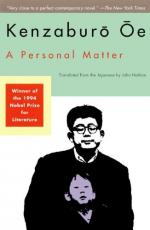 Kenzaburo Oe
This Study Guide consists of approximately 42 pages of chapter summaries, quotes, character analysis, themes, and more - everything you need to sharpen your knowledge of A Personal Matter.

This detailed literature summary also contains Topics for Discussion and a Free Quiz on A Personal Matter by Kenzaburo Oe.

This "coming of age" novel set in the early 1960's tells the story of Bird, a young Japanese man facing both the imminent birth of his first child and what he believes to be the imminent loss of his dreams. As the novel chronicles his struggles to avoid the responsibilities that come with the child's difficult birth, it also explores themes relating to the nature of parent/child relationships in general, and to the necessity of letting go of the past.

As the novel begins, Bird is in a bookstore, having just purchased some maps of Africa, a place he has long dreamed of visiting. As he goes in search of a telephone (to call his mother-in-law to find out how the birth is going), he reflects on the possibility that being a father will put an end to those dreams, and on his history as an alcoholic. After finding out that the birth is taking much longer than expected, Bird tests his strength in an arcade (where he learns he is weaker than he thinks he should be) and with a gang of young toughs in the arcade. He is initially overpowered by them, but then fights back and chases them off. The next morning, he receives word that the baby has been born, but there is something wrong with it. At the hospital, he discovers the baby has what is being called a brain hernia - parts of the brain have been pushed outside of the skull. After discussing the situation with the doctors (who assure him there is little chance of any surgery to correct the situation being successful), and after taking the baby to a second hospital (where tests will be done to determine the viability of surgery), Bird visits his father-in-law to pass on the news. The father-in-law, a professor at the local university, gives him a bottle of scotch. Bird decides to share it with an old girlfriend, Himiko, and visits her apartment.

Bird finds Himiko (whose husband has recently committed suicide) more than willing to share his scotch, but not quite as willing to drink it as quickly as Bird, who soon becomes intoxicated and passes out in Himiko's bed. The next morning, a hung-over Bird vomits in front of the class he teaches at a cram-school, and one of the students threatens to tell the principal. On his way back to Himiko's apartment, Bird realizes that he will probably have to use the money he had saved for his future trip to Africa to pay the baby's bills. This triggers in him a surge of anger which, in turn, transforms into intense sexual energy, which Bird eventually expends on Himiko. Later, Bird visits his wife in the maternity hospital, facing down her accusations that he is probably planning to abandon both her and the baby (whom she knows is ill) in the same way as he abandoned his youthful friend, Kikuhiko, whose name she is planning to give their son.

Back at Himiko's apartment, Bird and Himiko wait for news of the baby from the second hospital, and considering Bird's maps of Africa, which Himiko is starting to find interesting. The next day, Bird resigns from his job at the cram-school (before he can get fired), and is challenged by a friend of Himiko's and one of his own friends to look at his behavior and see how badly he's avoiding his responsibility. After being told that he and Himiko should follow through on their dreams of visiting Africa together, Bird receives word that his baby is almost strong enough to have the operation that may seal his brain in his skull properly. Bird tells the doctor planning the surgery, however, that he intends to take the baby home. The next day, Bird and Himiko take the baby from the hospital, planning to take him to a doctor that Himiko knows who has performed abortions and who, Himiko says, will help them get rid of the baby. Eventually, after getting lost in the rain, Bird and Himiko find the doctor's clinic and drop the baby off, afterwards going into a gay bar that Himiko knows for a drink. There, Bird encounters his former friend Kikuhiko, and conversation makes Bird realize that he, in effect, has no life to protect from what he believes to be the controlling, dominating influence of his child. This, in turn, makes him drive back to the clinic to save the baby. Later, after the baby's head and brain are surgically re-shaped, Bird's father-in-law comments on how much he (Bird) has changed, and how grown-up he now seems.

More summaries and resources for teaching or studying A Personal Matter.