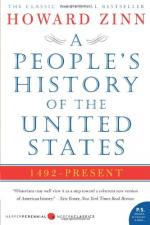 Howard Zinn
This Study Guide consists of approximately 31 pages of chapter summaries, quotes, character analysis, themes, and more - everything you need to sharpen your knowledge of A People's History of the United States.

Chapter 1 begins with Christopher Columbus' arrival in the Bahamas:

"Arawak men and women, naked, tawny, and full of wonder, emerged from their villages onto the island's beaches and swam out to get a closer look at the strange big boat. When Columbus and his sailors came ashore, carrying swords, speaking oddly, the Arawaks ran to greet them, brought them food, water, gifts." (Chapter 1, p. 1).

Columbus details his meeting with the Arawak in his ship's log, describing them as a people that would make fine slaves due to their ignorance. Columbus took some of the natives by force because he wanted to know where to find gold. Gold and spices were the two main things sought by Columbus as they were riches promised to the King and Queen of Spain. In return, Columbus would receive 10% of the profits from the...

A People's History of the United States from BookRags. (c)2023 BookRags, Inc. All rights reserved.