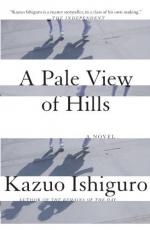 Kazuo Ishiguro
This Study Guide consists of approximately 35 pages of chapter summaries, quotes, character analysis, themes, and more - everything you need to sharpen your knowledge of A Pale View of Hills.

A Pale View of Hills Summary & Study Guide includes comprehensive information and analysis to help you understand the book. This study guide contains the following sections:

This detailed literature summary also contains Quotes and a Free Quiz on A Pale View of Hills by Kazuo Ishiguro.

The following version of this book was sued to create this study guide: Ishiguro, Kazuo. A Pale View of Hills. New York: Random House, 1990.

The novel follows two distinct storylines. One takes place in England in a time period approximately contemporary with the novel’s publication, which was in 1982. The other storyline takes place in Nagasaki, Japan, approximately a decade after the end of World War Two. The protagonist and narrator of the novel is Etsuko, a Japanese woman who immigrated to England over 20 years ago. She has two adult daughters. The older daughter, Keiko, recently committed suicide, and the younger daughter, Niki, has come to visit Etsuko in order to help comfort her. After Keiko’s death, Etsuko begins thinking of events from her past, which constitute the Japan storyline and the main focus of the novel.

Etsuko recalls a summer when she was still living in Nagasaki. It was about a decade after the end of World War Two. A widowed single mother named Sachiko—along with her young daughter Mariko—moved in to a cottage near Etsuko’s home. That same summer, Etsuko father-in-law, Ogata, was visiting Etsuko and her husband, Jiro. Etsuko soon befriended Sachiko and Mariko. Etsuko often babysat Mariko, as Sachiko frequently went downtown on dates with an American man named Frank. Frank promised that he would take Sachiko and Mariko to live with him in America. However, his promises seemed increasingly dubious.

Mariko often claimed that a woman secretly visited her. Sachiko eventually explained to Etsuko that these claims of Mariko’s were untrue. Years ago, when Sachiko and Mariko were living in Tokyo (which was still devastated from World War Two) Mariko witnessed the traumatic sight of a crazed woman drowning a baby in a river. After it became clear that Frank would not be taking Sachiko and Mariko to America, Sachiko contacted her uncle-in-law to ask if they could move back in with him. Although he assented to the idea, Sachiki seemed hesitant to actually move back to his house.

Instead, Sachiko reconnected with Frank, who once again made a dubious promise about taking Sachiko and Mariko to America. Sachiko decided that Mriko would not be able to take her pet kittens with them to America, so Sachiko drowned the kittens in a nearby river while Mariko watched. The narrative does not state whether or not Sachiko and Mariko ever did actually go to America. However, Etsuko and Jiro relocated to England after their child was born. The novel ends with a few more scenes between Etsuko and her younger daughter, Niki, in the days following the suicide of Etsuko’s first daughter, Keiko. Etsuko is dismayed when Niki says that she does not want to marry or have children.

More summaries and resources for teaching or studying A Pale View of Hills.

A Pale View of Hills from BookRags. (c)2022 BookRags, Inc. All rights reserved.