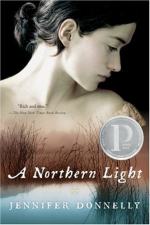 Introduction & Overview of A Northern Light

Jennifer Donnelly
This Study Guide consists of approximately 39 pages of chapter summaries, quotes, character analysis, themes, and more - everything you need to sharpen your knowledge of A Northern Light.

Jennifer Donnelly grew up on the outskirts of the Adirondacks hearing tales and ballads of the 1906 murder of Grace Brown, a pregnant nineteen-year-old drowned by her lover in Big Moose Lake. Donnelly's great-grandmother had been working at a hotel on the lake when the murder took place. Her firsthand account, reinforced by Donnelly's reading of Theodore Dreiser's novel concerning the same murder, stirred Donnelly's curiosity. Dreiser's novel, An American Tragedy, renders the couple's plight as a dark outcome of the American dream gone awry. What captured Donnelly's imagination, however, was Grace herself and how she could have been any nineteen-year-old girl. Upon reading the transcripts of Chester Gillette's trial and hearing Grace's voice through the letters used as evidence, the presence of the young woman haunted Donnelly. She felt a genuine grief which was alleviated through writing Grace's story and giving it fresh meaning. Out of that need was born the character of Mattie Gokey, the sixteen-year-old hotel employee who witnesses Grace's body being pulled from the lake the evening after Grace asks her to burn her love letters. In piecing together the story of Grace's life and death through the letters, Mattie comes to understand and solve many of the problems standing in the way of her own happiness and independence. A Northern Light, published in 2003, transcends genre boundaries and was praised by Courtney Williamson of the Christian Science Monitor for "unflinching honesty in its portrayal of loss, poverty, racism, and pregnancy." It was an overnight success in both the United States and Great Britain (where it was published under the title A Gathering Light). It has since earned several major awards in young adult fiction, including the Los Angeles Times Book Prize and the Carnegie Medal.

More summaries and resources for teaching or studying A Northern Light.