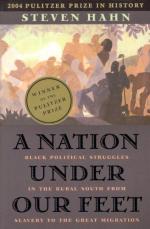 A Nation Under Our Feet: Black Political Struggles in the Rural South from Slavery to the Great Migration Topics for Discussion

Discuss some of the ways in which slaves were able to resist their owners under slavery. What consequences did these actions have potentially?

Discuss the role of communities and kinship networks in African American political development in the nineteenth century. Why were these relationships so important?

What is "biracialism?" Did this benefit African Americans and/or whites?

How did Democrats accomplish black disenfranchisement at the end of the nineteenth and early twentieth centuries? What made this possible?

What was the Union League? How does it relate to the Republican Party? What effect did it have on African Americans during the nineteenth century?

What was the Emigrations Movement? Why was this movement appealing to many African Americans? What consequences did it have for white southerners?

During the nineteenth century, whites used a number of tactics to discourage African Americans from voting and from challenging the...

A Nation Under Our Feet: Black Political Struggles in the Rural South from Slavery to the Great Migration from BookRags. (c)2022 BookRags, Inc. All rights reserved.