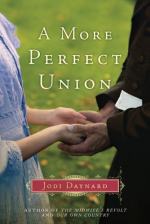 Related Topics
The Midwife's Revolt
Our Own Country: A Novel

Jodi Daynard
This Study Guide consists of approximately 66 pages of chapter summaries, quotes, character analysis, themes, and more - everything you need to sharpen your knowledge of A More Perfect Union.

This detailed literature summary also contains Quotes and a Free Quiz on A More Perfect Union by Jodi Daynard.

Johnny Boyleston Watkins was born in America but his parents fled to Barbados where their marriage would be recognized and accepted. His father, a former slave, built ships and made a life for his family there. Johnny grew up hearing about America and always longed to return. When his father died, an adopted member of the family inherits the ship business, leaving Johnny and his mother, Eliza, free to travel to America. They plan for Johnny to pass himself off as white. His light skin makes it possible, though everyone knows he runs the risk of someone finding out the truth.

Johnny successfully passes the entrance exams for Harvard and believes he has found a friend in his brash roommate, Peter Fray. Johnny travels to Peter's home in Virginia for the winter holiday, despite his mother's warnings. There, he sees the cruel side of slavery when Peter's older brother, Fred, rapes a young slave girl named Harriet. Johnny hates that he is powerless to stop the abuse and impulsively leaves Harriet with his pocketknife. After he is gone, he realizes it was a stupid decision. Johnny also meets the beautiful young socialite, Marcia Burnes, during his visit. Though he is too tongue-tied to make conversation with her, they each feel a connection.

Johnny leaves Virginia early and is happy to be back with his mother, extended family and friends. He soon begins to spend time with a student named Eliot Mann who has consumption, and with Kate, the daughter of his mother's close friend. The three meet regularly for scholarly discussions, creating a small circle of friendship that sustains Johnny when he would otherwise be very lonely. Peter does not return for months and Johnny discovers that one of the slaves used Johnny's pocketknife to kill Fred. Peter pledges revenge but his family's financial downfall forces him out of Harvard.

Eliot dies of consumption, leaving Johnny bereft. He graduates Harvard in three years and, with the help of a John Adams, a family friend, takes on a position as a law clerk where he reunites with Marcia. They soon have an understanding that they will marry, though Johnny still feels a connection to Kate. Johnny hates his law position because he feels he is nothing more than a glorified secretary and is no closer to being ready to pass the bar exam. He spends some time with President John Adams, who offers Johnny a position on his staff.

Johnny soon discovers that politics is a ruthless business, and he spends every spare moment studying, gaining his law license and planning his wedding to Marcia. Meanwhile, Peter has looked up some mutual acquaintances and learns the truth of Johnny's heritage – that his father was a slave and that makes Johnny black in the eyes of society and the law. Marcia refuses to see him, a job offer is rescinded, and Johnny winds up going home in disgrace. He falls from the ship just as it reaches the harbor and almost drowns, forcing him to spend weeks recuperating.

As he recovers, Johnny realizes his feelings for Kate are stronger than ever and she has no concern about his heritage, having known since shortly after his arrival. They marry and Johnny sets up a law office which flounders until Abigail Adams arrives to hire him for a bogus claim, meant only to give him public approval which opens the door for others to use his services. Johnny realizes he will never be elected to a public office, but he becomes involved in fighting slavery and local organizations, accepting that he will live a quiet life and leave it to others to change the world.

More summaries and resources for teaching or studying A More Perfect Union.