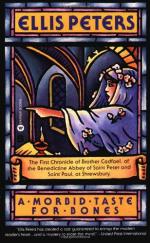 Edith Pargeter
This Study Guide consists of approximately 45 pages of chapter summaries, quotes, character analysis, themes, and more - everything you need to sharpen your knowledge of A Morbid Taste for Bones.

A Morbid Taste for Bones Summary & Study Guide includes comprehensive information and analysis to help you understand the book. This study guide contains the following sections:

This detailed literature summary also contains Topics for Discussion and a Free Quiz on A Morbid Taste for Bones by Edith Pargeter.

In 12th century England, a monk from the Benedictine Abbey of Saint Peter and Saint Paul at Shrewsbury sees a vision of Saint Winifred pleading for her remains to be transported to the Shrewsbury Abbey, where she can be treated with the respect and honor she needs. The ambitious head of the Shrewsbury Abbey, Prior Robert, is more than happy at the news since the acquisition of such a relic is just the thing he needs to boost the reputation of their abbey and of course himself in the process. Brother Cadfael, a native Welshman and a monk in the Shrewsbury monastery, is sent as a translator along with the men Prior Robert decides to take on the expedition into the Welsh town of Gwytherin where Saint Winifred is buried.

The monks arrive to find the villagers passionately divided by the Prior Robert's proposition. In classic whodunit style, a murder is committed, and the rest of the story unravels the investigation led by the multi-talented Brother Cadfael. Brother Cadfael does not wait for the law to deal with the situation. He takes matters into his own skillful hands and sifts through possible suspects. Brother Cadfael, armed with real world wisdom acquired from a colorful past filled with travel, war and adventure, makes great progress in the case with the help of friendly villagers.

The murder victim is a rich landlord by the name of Rhisiart, and the list of suspects is divided between two groups. One is the man in love with his beautiful daughter, Sioned. The other group is the Benedictine brothers who have much to gain by the murder of the most ardent dissenter against their plans to go home with Saint Winifred's bones. Although Prior Robert tries to pin the murder on Saint Winifred herself and warns the villagers not to continue standing in the way of her will, he is more than happy when Engelard, one of Rhisiart's employees, is accused of the murder.

Brother Cadfael skillfully plots one plan after another and slowly uncovers all of the town's secrets and scandals in an effort to put the pieces of the murder mystery together. After going through a list of suspects, Cadfael, along with Sioned, discover that the murderer is Brother Columbanus. Peredur, Sioned's childhood friend and admirer and the man her father wanted her to marry, had found her father dead and stuck one of Engelard's arrows into him. Engelard is the man Sioned really loves. Peredur wanted to frame Engelard for the murder in order to get rid of him and have Sioned all to himself.

In a final twist, Engelard accidentally kills Columbanus, but Brother Cadfael rectifies the situation by placing Columbanus' dead body in Saint Winifred's casket and returning Winifred to her grave, where he believes she really wants to stay. They explain Columbanus' disappearance by claiming that Winifred has answered Columbanus' prayer to bless him with leaving his body in a final trance and joining her for good. This way Cadfael ensures that as many people as possible are happy. Prior Robert does not have to face the shame of having a murderer amongst his brothers. Engelard is free to be with Sioned, and most importantly Saint Winifred gets to remain in her grave in Gwytherin.

More summaries and resources for teaching or studying A Morbid Taste for Bones.

A Morbid Taste for Bones from BookRags. (c)2022 BookRags, Inc. All rights reserved.