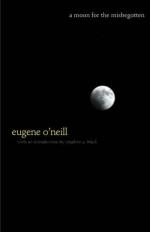 A Moon for the Misbegotten - Act I Summary & Analysis

It is a hot clear day in September, just before noon. Josie, twenty eight years old, emerges from a Connecticut farmhouse waiting for her brother Mike. She is relieved when Mike finally arrives. When Josie asks why Mike is late, he blames their father and speaks disrespectfully of him. For this, Josie slaps Mike. The force is more than intended and Mike stumbles back.

Josie is helping Mike run away. Mike is focused on virtue and purity, while Josie is not, but Josie is going to help him despite their differences. She acknowledges their father is overbearing and Mike cannot stand up to him.

Josie points out that their two other brothers couldn't stand up to their father either and Josie had helped them run away as well. Thomas is now a police officer in Bridgeport, and John tends bar in...

A Moon for the Misbegotten from BookRags. (c)2022 BookRags, Inc. All rights reserved.