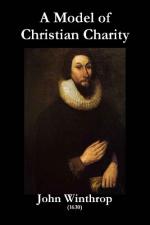 Introduction & Overview of A Model of Christian Charity

John Winthrop
This Study Guide consists of approximately 25 pages of chapter summaries, quotes, character analysis, themes, and more - everything you need to sharpen your knowledge of A Model of Christian Charity.

A Model of Christian Charity Summary & Study Guide includes comprehensive information and analysis to help you understand the book. This study guide contains the following sections:

This detailed literature summary also contains Bibliography on A Model of Christian Charity by John Winthrop.

John Winthrop's "A Model of Christian Charity," also known as "A City on a Hill," is often cited to illustrate America's status as the leading nation of the world. It has been quoted by numerous politicians, most notably Ronald Reagan in his 1981 inaugural address, to signify America as a beacon of civilization responsible for guiding the rest of the world into the future. A thorough reading of Winthrop's speech, along with an understanding of the circumstances in which Winthrop wrote it, yields a much deeper understanding of the message he meant to convey.

John Winthrop was selected as governor of the Massachusetts Bay Company in 1629, and he was given the task of leading a fleet of Puritan settlers to establish a community of their own in New England the following year. The speech was given to his fellow travelers on board the Arbella, the flagship of this fleet, as they prepared to sail from their native England. Winthrop's words laid out specific guidelines for living together in a Christian community—an important message because many of the settlers came from different regions and did not know each other before the journey. Winthrop also cautioned that the world would be watching them, and that failure to fulfill their duty to God would not only ruin their chances of prosperity, but would also disgrace like-minded Christians across the globe.

Though Puritans are often depicted in popular American culture as cold and unemotional, "A Model of Christian Charity" provides insight into the warmth and depth with which Winthrop and other Puritans sought to form bonds of community among themselves. Winthrop states to the gathered congregation that "we must love one another with a pure heart fervently," and details the ways in which each member should exhibit charity and mercy to all other members of the community. He emphasizes communal living, with the wealthiest and most prosperous members of society freely giving to the poorest members, as well as charitable lending principles that would require a lender to simply forgive a debt if the borrower had no means of repayment.

It is the final section of "A Model of Christian Charity," however, that has received the most attention. In it, Winthrop compares their new Massachusetts Bay colony to "a city upon a hill": Like a city rising above the surrounding land, it is visible to all, and surely will be subjected to careful scrutiny. Winthrop suggests that if he and his fellow Puritans succeed, they will serve as a shining example for others to follow. However, if they fail, their failure will bring disgrace to all Christians everywhere.

More summaries and resources for teaching or studying A Model of Christian Charity.

A Model of Christian Charity from BookRags. (c)2021 BookRags, Inc. All rights reserved.