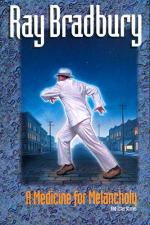 Related Topics
A Graveyard for Lunatics
Bradbury Classic Stories 1: From the Golden Apples of the Sun and R Is for...
Dandelion Wine
Fahrenheit 451
Quicker Than the Eye

A Medicine For Melancholy and Other Stories Summary & Study Guide

Ray Bradbury
This Study Guide consists of approximately 48 pages of chapter summaries, quotes, character analysis, themes, and more - everything you need to sharpen your knowledge of A Medicine For Melancholy and Other Stories.

A Medicine For Melancholy and Other Stories Summary & Study Guide Description

A Medicine For Melancholy and Other Stories Summary & Study Guide includes comprehensive information and analysis to help you understand the book. This study guide contains the following sections:

This detailed literature summary also contains Quotes and a Free Quiz on A Medicine For Melancholy and Other Stories by Ray Bradbury.

“A Medicine for Melancholy” is a collection of thirty-one short stories by Ray Bradbury that range from fantasy and science fiction to romance and horror. In the story “In a Season of Calm Weather”, George Smith longs to own a painting by his favorite artist, Picasso, but cannot afford it. Stunned to see Picasso drawing in the sand at the shore, George is heartbroken because he is unable to save the drawings from the tide. In “A Medicine for Melancholy”, the teenaged Camillia seems to be suffering from an unknown ailment, which a Dustman named Boscov cures her of by having sex with her. In “The Wonderful Ice Cream Suit”, six Mexican-American men, down on their luck, purchase a white summer suit with the hopes it will give them confidence and change their lives. In “Fever Dream”, young Charles is sick and has his body taken over by a parasitic germ, wherein he sets out to spread the contagion to other people. In “The Marriage Mender”, a married couple argues about whether their bed is too uncomfortable or just right, only to have the couple come to love the bed when the wife learns she is pregnant.

In “The Town Where No One Got Off”, a man on a train gets off at a random town for a change in life, only to meet a man who has never left the town who harbors the same ill thoughts as he does. In “A Scent of Sarsaparilla”, the elderly William Finch discovers his attic is a time machine. His wife refuses to believe him, or to accompany him when he asks her to come with him permanently into the past. She is stunned when William disappears from the attic before her eyes. In “The Headpiece”, a deformed man hopes his new hair will make him more attractive to his blind, pretty neighbor, but she remarks that even with the headpiece, she can still see his deformity because the man has not come to love himself. In “The First Night of Lent”, the narrator discovers his Irish driver is only a capable driver when drunk. In “The Time of Going Away”, the elderly Willie believes he is dying after reading a National Geographic article about how Pacific Islanders feel their time is coming and say goodbye. His wife is annoyed when Willie leaves to die, only to come home a few hours later, healthy, hungry, and cold. In “All Summer in a Day”, young Margot predicts the rains on Venus will stop that very day, only to have her classmates disbelieve her and lock her in a closet as the sun comes out for an hour.

In “The Gift”, a mother and father bring their son up to space to celebrate Christmas. In “The Great Collision of Monday Last”, an American of Irish descent visiting Ireland volunteers to drive two bicycle collision victims to the hospital through heavy fog when no Irish locals will brave the weather conditions. In “The Little Mice”, a landlord discovers his Mexican tenants, quiet as mice, are so quiet because all they do is drink when they come home from work. In “The Shore Line at Sunset”, Tom and his best friend Chico discover a stranded mermaid. Tom lets the mermaid go rather than allowing Chico to capture her and sell her. In “The Day It Rained Forever”, three elderly permanent male residents of an old desert hotel feel rejuvenated and if the rains have come when an elderly female music teacher moves in. In “Chrysalis”, a man named Smith, poisoned by radiation, goes through morphological changes and gains the ability to fly and breathe in space. In “Pillar of Fire”, a reawakened corpse William Lantry decides to spread fear in the future world where he now has awakened because the future world has done away with the sentiment and emotion of fear. In “Zero Hour”, the children in Mrs. Morris’s neighborhood unwittingly unleash an alien invasion when they think they are merely playing games.

In “The Man”, skeptical Captain Hart, faithful Lieutenant Martin, and their exploration crew discover a planet where Jesus has been. Hart cannot believe it, so sets off to find scientific proof that Jesus exists, while Martin, ever faithful, learns that Jesus is still on the planet. In “Time in Thy Flight”, Mrs. Fields brings three students on a time machine field trip back to Illinois in 1928, where two of the children decide to stay behind because they fall in love with a better world. In “The Pedestrian”, a writer who enjoys evening walks in a modern age where no one does such things anymore unless they have to is arrested and taken to a psychiatric center. In “Hail and Farewell”, a man of 43 who has never aged past 12 must move around every few years to avoid suspicion. In “Invisible Boy”, a local witch pretends to make the son of family friends invisible at his request. In “Come into My Cellar”, neighborhood boys unknowingly unleash a mushroom alien invasion.

In “The Million-Year Picnic”, people from Earth come to live on Mars during an atomic war. In “The Screaming Woman”, a nearly-murdered woman is saved by the song she sings, attracting help in the nick of time. In “The Smile”, a young boy saves a scrap of the Mona Lisa from being destroyed by his contemporaries who blame the past for the post-atomic war world in which they live. In “Dark They Were, and Golden-Eyed”, Earth colonizers on Mars are physically transformed into Martians by the Martian atmosphere and setting. In “The Trolley”, an elderly trolley driver takes the local kids on one last ride on the trolley before the service is shut down in favor of buses, which none of the kids want to happen. In “Icarus Montgolfier Wright”, Jedediah dreams he is Icarus, the French ballooner Montgolfier, and the Wright Brothers, all in the night before he is set to become the first person to fly a rocket to the Moon.

More summaries and resources for teaching or studying A Medicine For Melancholy and Other Stories.

A Medicine For Melancholy and Other Stories from BookRags. (c)2022 BookRags, Inc. All rights reserved.