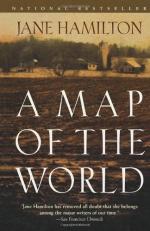 A Map of the World Summary & Study Guide

Jane Hamilton
This Study Guide consists of approximately 69 pages of chapter summaries, quotes, character analysis, themes, and more - everything you need to sharpen your knowledge of A Map of the World.

A Map of the World Summary & Study Guide Description

A Map of the World Summary & Study Guide includes comprehensive information and analysis to help you understand the book. This study guide contains the following sections:

This detailed literature summary also contains Topics for Discussion and a Free Quiz on A Map of the World by Jane Hamilton.

A Map of the World by Jane Hamilton depicts from the perspectives of wife and husband the trauma of the death of a child, jailing on charges of child molestation, alienation from the community, and eventual acquittal.

Alice Goodwin is expecting a pleasant summer free from work as a school nurse when she gets distracted and a neighbor's child in her care drowns in the lake on the farm property owned by her and husband Howard. Alice is consumed by guilt and shuts out Howard. Howard desperately needs her to snap out of it and resume caring for their young children, Emma and Claire. She makes a scene, fleeing Lizzy Collins' funeral and cannot face her best friend, Lizzy's grieving mother, Theresa. Rallying to the point of attending a school board meeting about her job, Alice again flees to the restroom and then the school property. Between these events, she is questioned by police about a hateful student, Robbie Mackessy, whom she once slapped. Worried about all of the grief that she has called, Alice blurts out that she hurts everyone. The police take this as an admission that their investigation of molestation claimed by Robbie's mother is true and Alice is arrested next morning.

Bail is set so high that Alice settles into jail life. Howard concentrates on the hopeless task of caring for the children and keeping house while also performing the minimal chores required on a dairy farm. He comes to resent Alice for destroying the family and throwing them further into debt. Still, she is the family's rudder and he needs her back. Howard accepts help from Theresa but when they become too close for comfort, Theresa backs away. Overwhelmed, Howard sells the farm and moves the girls into a temporary apartment near the jail and court. He keeps the sale secret from Alice's lawyer, Paul Rafferty, and Alice herself. Alice comes to admire some of her fellow inmates but is hospitalized during an incident just before the bail money becomes available.

Alice is glad to be free and reunited with her children, but feels like in the farm she has lost something precious without being consulted. Resentment for Howard's controlling ways deepens. Emotions rise and fall as the trial goes forward, with Rafferty proving that Robbie fits the profile of a PTSS child traumatized by seeing his mother engaging in rough sex with a stranger. Acquitted, Alice hopes that her marriage can mend in Chicago.

More summaries and resources for teaching or studying A Map of the World.

A Map of the World from BookRags. (c)2022 BookRags, Inc. All rights reserved.