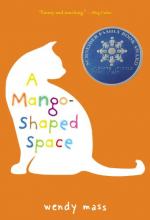 Related Topics
Every Soul a Star
The Candymakers

Wendy Mass
This Study Guide consists of approximately 52 pages of chapter summaries, quotes, character analysis, themes, and more - everything you need to sharpen your knowledge of A Mango-Shaped Space.

This detailed literature summary also contains Quotes and a Free Quiz on A Mango-Shaped Space by Wendy Mass.

“A Mango Shaped Space” is the story of Mia Winchell. She sees colors and shapes with every sound and letter, and she's in the third grade when she discovers that not everyone sees the world as she does. She struggles through the ridicule of her classmates and hides her secret from everyone, including her family and her best friend, Jenna. Her life is good with one major exception – math. She struggles to get past the colors the numbers evoke in her head and can't do any complex math. When she enters eighth grade, she also begins to struggle with Spanish because the colors and shapes of Spanish words don't match their English counterparts. When her struggles in math become too much, Mia finally tells her parents her problem. They are skeptical only for a short time before they set out to find out what's wrong.

Mia's pediatrician sends her to a psychotherapist who refers Mia on to a neurologist named Jerry Weiss. Jerry tells Mia the name of her condition is synesthesia and that she isn't alone. He explains how the condition occurs and Mia meets a group of other people who have variations of synesthesia. She begins learning to manage her condition and meets a math tutor who helps her begin to learn to manipulate numbers.

Mia's best friend, Janna, lives nearby and believes she and Mia have shared everything. Mia was with Jenna when Jenna's mother died and they spend a lot of time together. When Mia has to miss school for doctor's appointments, Jenna becomes worried. Mia finally realizes that it's wrong to make Jenna keep worrying, and she tells her everything. Mia expects that Jenna will be sympathetic, but Jenna is furious to learn that Mia has kept something so significant a secret all these years. She feels betrayed and, in that anger, tells some of her classmates Mia's secret. It's soon common knowledge at school and Mia is bombarded by students asking her to tell them the color of their names. The teasing isn't as severe as Mia feared but she feels out of place and distracted.

Mia has a cat who has a raspy wheeze when he breathes. Mia named him Mango because that's what color she sees when she hears him breathe. Mia and her grandfather were very close and she found Mango near his grave on the day of his funeral. She believes that Mango is the host for a small piece of her grandfather's soul, and the thought gives her comfort.

One night, Mia discovers that Mango is outside in the freezing weather. The next morning, he is very sick and dies before they can take him to the veterinarian. Mia is heartbroken, partly because she feels that her grandfather is now truly gone, but partly because she feels responsible for Mango's death. By now, Mia has become friends with a boy named Adam she met on a synesthesia website. She believed he would understand her because of their shared synesthesia, but discovers that he's an insensitive jerk. A boy in her class, Roger, sincerely tells her how sorry he is over Mango's death. It's only then that Mia learns that Roger is colorblind.

As she comes to a diagnosis, Mia wonders if she would eliminate the colors and shapes from her life if she could learn how. She sort of fears what her life would be like without the colors. When Mango dies, the colors are gone. Her neurologist assures her they'll probably return and suggests some ways to make that happen. Mia decides to leave it to fate. She meets a young boy who lives nearby who also has synesthesia. She and her mother hope they are giving the boy and his family a way to handle the situation earlier in life, a head start that Mia didn't have.

A short time after Mango's death, Mia discovers the neighbors have kittens, including one that looks very much like Mango. When Mia pets the kitten, she discovers his sounds are the color of mustard. She laughs, knowing that Mustard will be an interesting name for a kitten.

More summaries and resources for teaching or studying A Mango-Shaped Space.