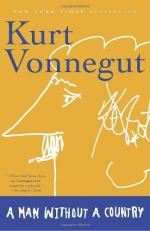 Plot Summary
+Chapters Summary and Analysis
Chapter 1, "As a Kid I was the Youngest"
Chapter 2, "Do You Know What A Twerp Is?"
Chapter 3, "Here is a Lesson in Creative Writing"
Chapter 4, "I'm Going to Tell You Some News"
Chapter 5, "Okay, Now Let's Have Some Fun"
Chapter 6, "I Have Been Called a Luddite"
Chapter 7, "I Turned Eighty-two on November 11"
Chapter 8, "Do You Know What a Humanist Is?"
Chapter 9, "Do Unto Others"
Chapter 10, "A Sappy Woman from Ypsilanti"
Chapter 11, "Now Then, I Have Some Good News"
Chapter 12, "I Used to be the Owner and Manager of an Automobile Dealership"
Free Quiz
Characters
Objects/Places
Themes
Style
Quotes
Topics for Discussion
Order our A Man Without a Country Study Guide

A Man Without a Country Setting & Symbolism

Kurt Vonnegut
This Study Guide consists of approximately 38 pages of chapter summaries, quotes, character analysis, themes, and more - everything you need to sharpen your knowledge of A Man Without a Country.

Dresden is a German city where Kurt Vonnegut, and other American prisoners of war, were held during the infamous firebombing of Dresden by the British. Over 135,000 Germans died in a single night. Vonnegut's memories were the basis of one of his finest novels, Slaughterhouse-Five.

Humor and comedy, by Vonnegut's definitions, are much more than they appear. Not only is good comedy material that makes you laugh, because it is linked to death and tragedy, but also a necessary self-defense mechanism that allows people to remain somewhat together in a really screwed-up world.

New York City is one of Kurt Vonnegut's places of residence. One chapter that discusses a daily routine he once enjoyed before the advent of computers focused solely on this location, including going to a post office located right by a United Nations. This is one of the longest sections...