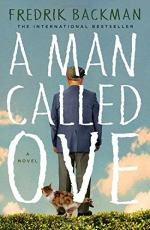 Fredrik Backman
This Study Guide consists of approximately 55 pages of chapter summaries, quotes, character analysis, themes, and more - everything you need to sharpen your knowledge of A Man Called Ove.

This detailed literature summary also contains Quotes and a Free Quiz on A Man Called Ove by Fredrik Backman.

The novel begins with a description of 59-year-old Ove struggling to communicate with a young man who is trying to sell him a computer. The conversation ends in frustration for Ove, who storms out of the store.

The narrative then begins a book-long sequence of explanations as to how and why Ove got to the point of needing and wanting to buy a computer. Chapters written in present tense describe his experiences in the more recent past: his frequent attempts to kill himself in the aftermath of his wife’s death; how those attempts are continually foiled, albeit accidentally, by the sudden appearances in his life of people (and animals) who need his help; and by the development of unexpected connections and friendships with those people (and animals). Central to the narrative of this recent past is Ove’s discovery that one-time friends up the road, Rune and Anita, are facing an extremely painful situation: Rune’s Alzheimer’s is getting the better of him, and Anita is struggling to take care of him. Plans are being made, without permission from either of them, to move Rune into a care facility. Over the course of the narrative, Ove becomes increasingly angry about this situation, eventually drawing on the support of a number of unexpected allies: his pregnant neighbor Parvaneh and her husband Patrick; the yuppie across the street (Anders); a pushy journalist (Lena); and three young men, each struggling to define their identities … the diffident Adrian, the flamboyantly gay Mirsad, and the overweight Jimmy.

Intermittently dispersed throughout the novel’s present tense chapters are chapters written in past tense that recount Ove’s history: how his mother died when he was six; how he was raised by a strict but fair father, whose inspirational integrity guided Ove throughout his entire life; how circumstances led him to meet his beloved Sonja; how his life was changed by marrying her; and how other circumstances challenged and changed their marriage irrevocably. These circumstances include an accident that robbed Sonja of the use of her legs, and robbed both her and Ove of the child that they had both longed for.

All the while, these intertwined narrations draw vivid, and sometimes unexpected, connections between Ove’s past and his present: while the past makes it clear, for example, that the friendship between Ove and Rune was strained for a long time, the present makes it very clear how Ove becomes willing to help and support his friend in spite of their decades-long estrangement. Narration also reveals how Jimmy’s relationship with Ove and Sonja goes back into his childhood, and into challenging circumstances that are both surprising and moving, evocative of just how compassionate a human being the ostensibly curmudgeonly Ove actually is.

Eventually, and with the help of Ove and several unexpected allies, Rune and Anita withstand the threat to their marriage. Meanwhile, and as a result of the bonds formed during the battle, Ove’s relationships with his friends and neighbors deepen and help him come back to life again … that is, until an encounter with some young, violent robbers, puts Ove in the hospital. He almost dies, but both medical treatment and the care / support of his friends enable him to live a few more years until he finally dies, seemingly in his sleep, leaving behind a legacy of compassion.

More summaries and resources for teaching or studying A Man Called Ove.